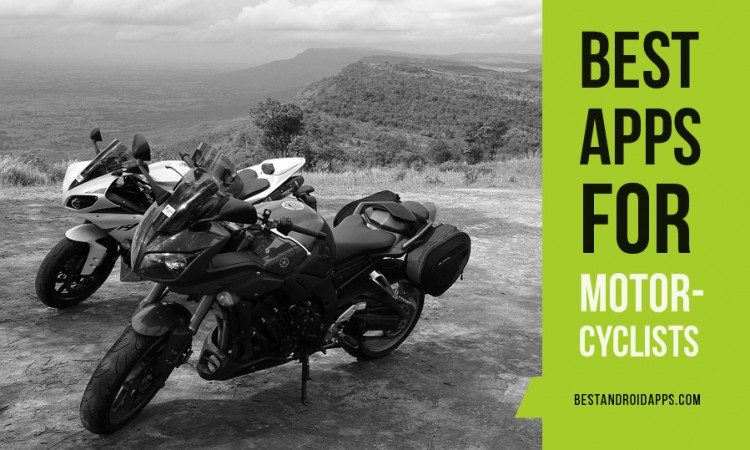 There is something about taking to the open road on a 750cc supersport that can’t be compared to anything else. Whether your poison is off road riding on a Yamaha YZ450F, or track days on a Suzuki GSXR-600, or perhaps you prefer the low slung comfort and sheer presence of a Cruiser, motorcycles fill a need most of us don’t know we had at some level. They remain some of the most fuel efficient and reliable sources of transportation in the United States. Althought they seem to have gotten a bad rap due to the danger associated with them, most would agree that it really comes down to a few rules. We would be remiss to not include them on this post in case you happen to be in the market for one or if you just bought one.

That being said, let’s continue.

The fact of riding a bike is thus, there is no real room for playing on your phone as we’re sure many of you have while driving a car. At best, you’ll operate your phone while you’re stopped. The whole point of finding time to ride is leaving much of the technobabble behind us. So the thing to keep in mind in this article is, we’re talking about apps that motorcyclists can actually use. Apps to keep safe, stay fueled, and avoid being lost–because it does happen. 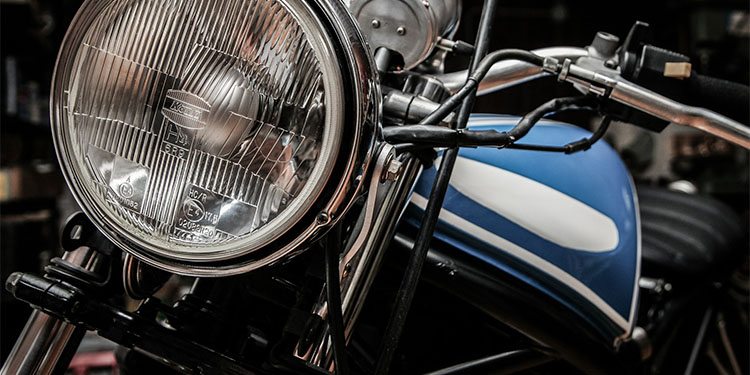 This was the first item of business for us. There is absolutely nothing that affects the ride on a bike more than the weather. Picture this, you have all your bases covered, you know the basics, and you want to go out for a ride. The sky look clear, there should be no real weather concerns and if there were then you would have heard about it right? You’ll pull out and two hours later you’re in a torrential rain with 20 ft of visibility and no rainsuit.

To avoid that, motorcyclists become weatherpersons real quick. This app has everything you need to plot a safe trip wherever your heart takes you. 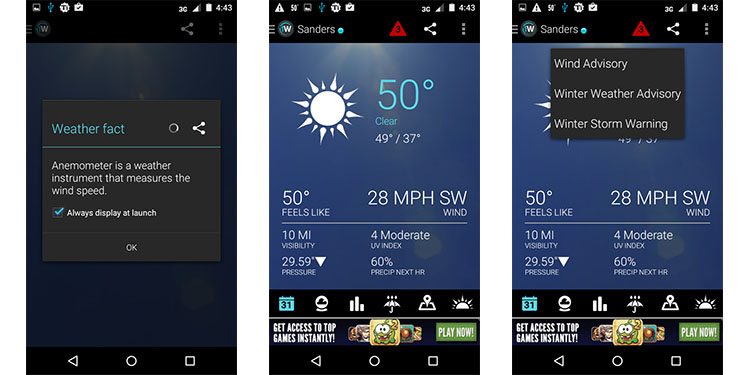 Your dashboard with everything you need to know at a glance… 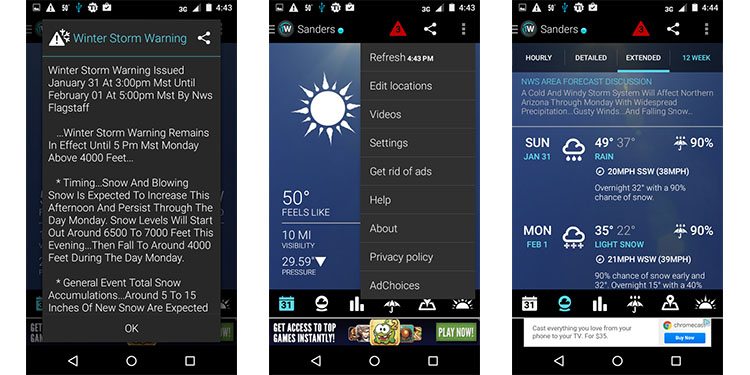 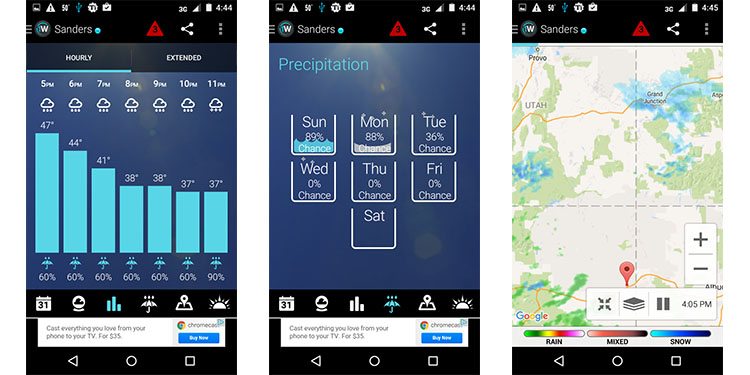 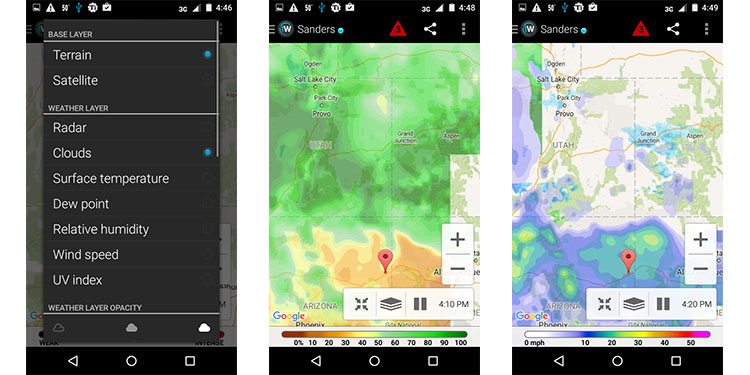 The shining jewel in this application is the radar/map tool. You can see all types of information spaced over a few hours to deduce where the winds may carry the weather next. 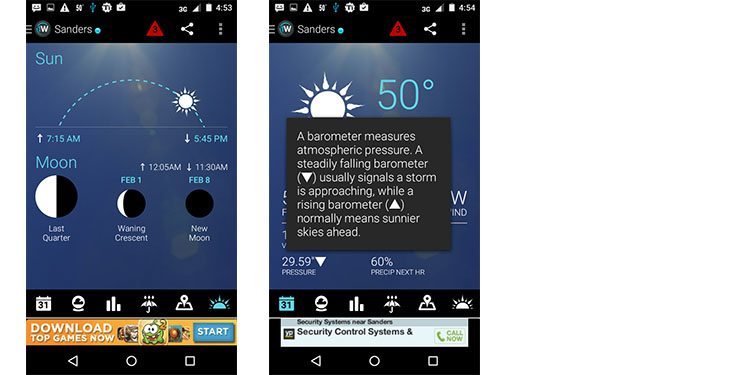 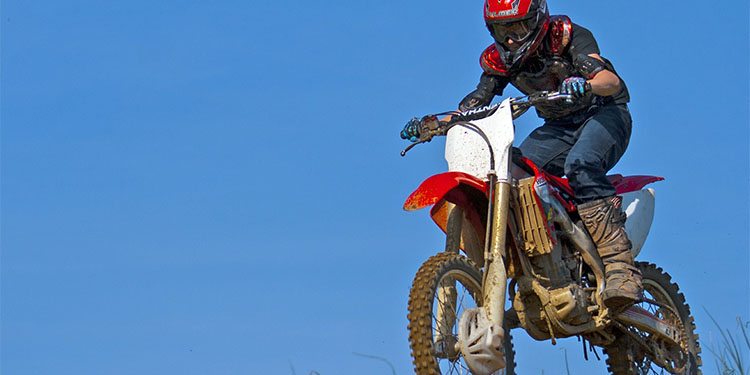 Second to the first point, the next thing that we all need to keep track of are pit stops for gas. Now with our already low cost of gasoline per gallon, we aren’t so concerned with the price as we are with the location. When you’re on a bike and your tank may only hold a few gallons, making sure you can sustain the distance between stations is very important. This may not be a problem on the eastern half of the United States but as you travel west of the Rocky Mountains the distances between service stations can get stretch to seemingly eternity when you’re on reserve and you don’t know how far to the next town. 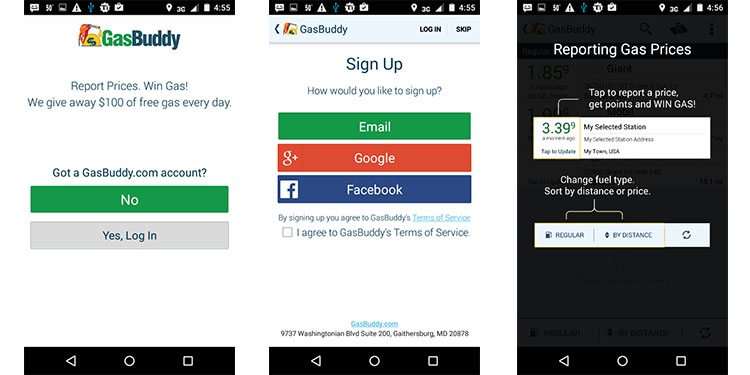 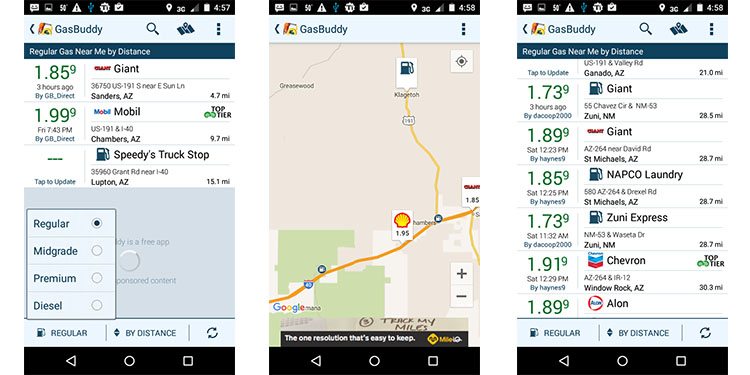 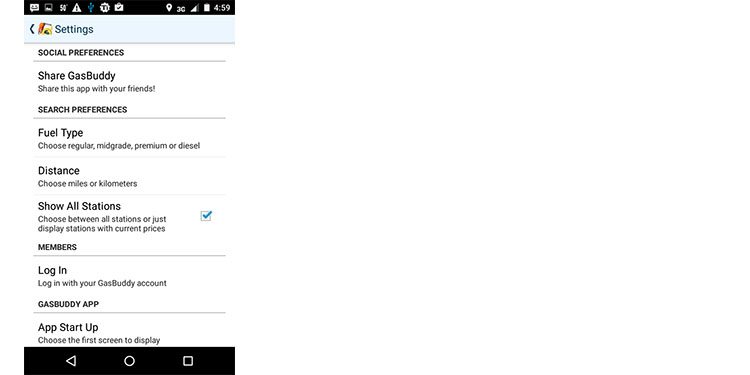 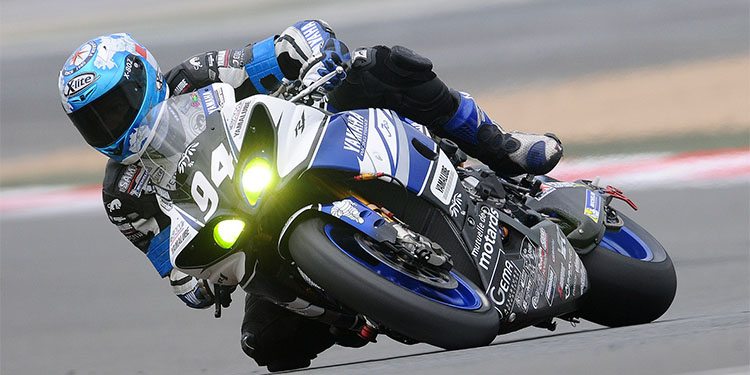 Third important point to make is even in today’s day and age it is still very possible to get lost. In fact, it’s easier to get lost in places where there’s more people than in places where there isn’t. In any new city the rule of thumb is we’re all going to be on training wheels for a few months. GPS helps immensely, especially when we really aren’t going to be there for very long or if we just happen to be passing through. 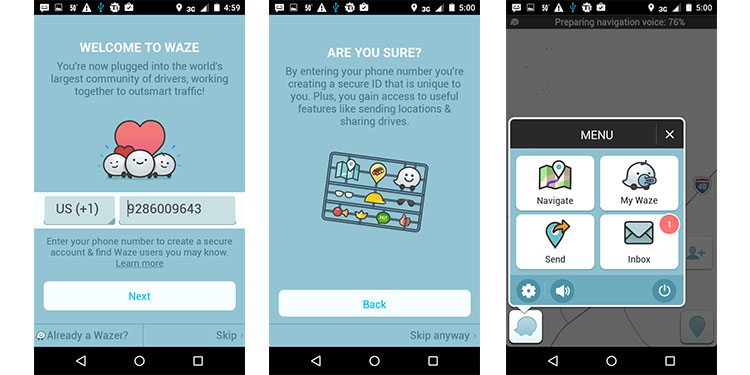 As with most apps, there is the profile that might be helpful… or it might not be. 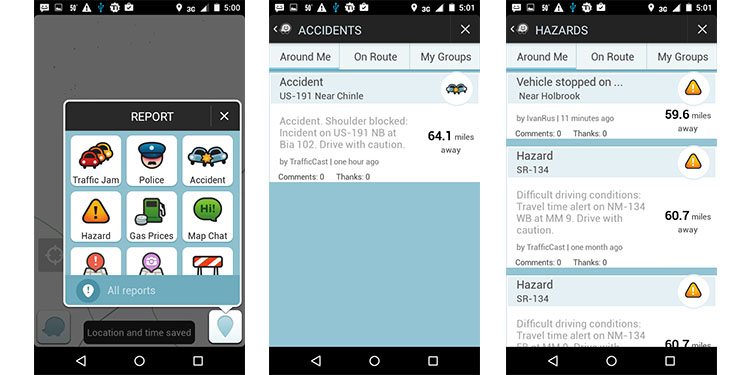 Perhaps the most awesome aspect of this application is the ability to plot out where police speedtraps are at on the map. If you aren’t already using a radar detector, this might help a little more than watching for other bikers to tap their helmets for ya. Speeding aside, if Google Now doesn’t work as often as it should, you get secondary protection from accidents and delays with the Road Hazard reports. 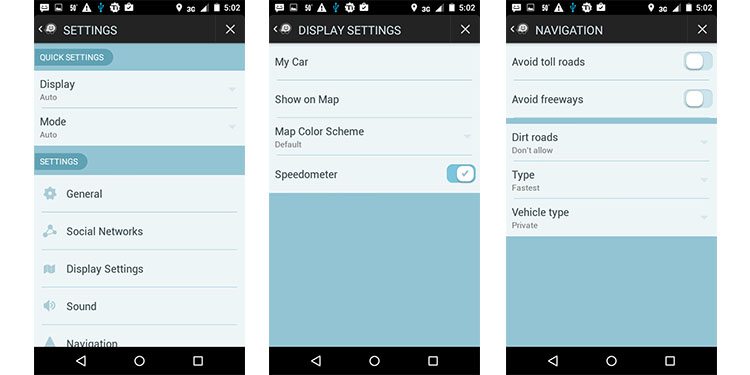 Your settings are pretty general. 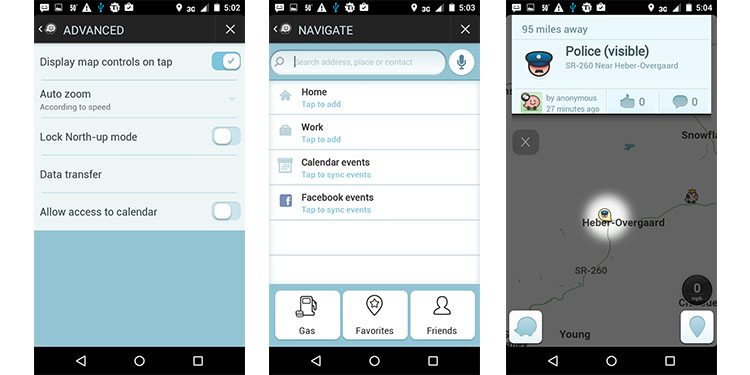 See what I mean?

Get Waze on Google Play 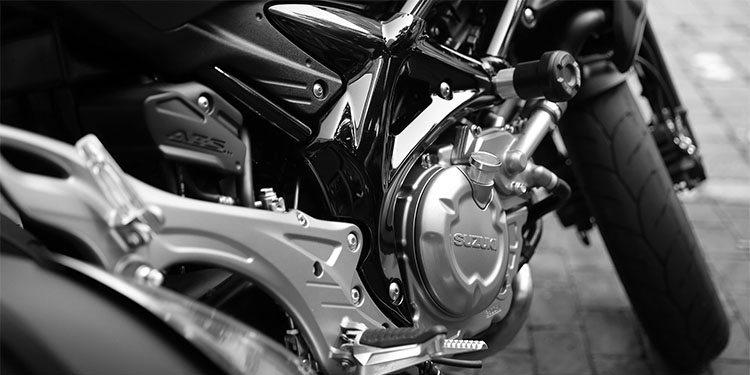 Now these aren’t that important other than passing the time with or making a plan for that dream bike you’ve always wanted. You have one app that compares specifications, prices, and even has reviews from owners. 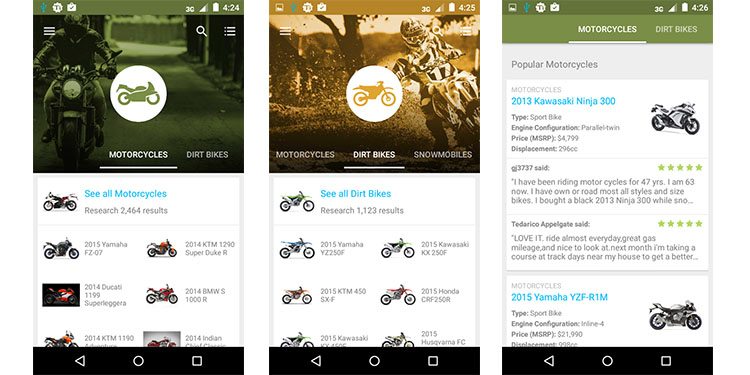 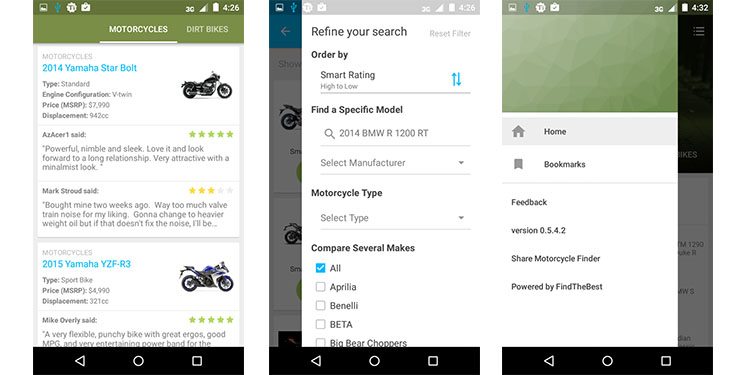 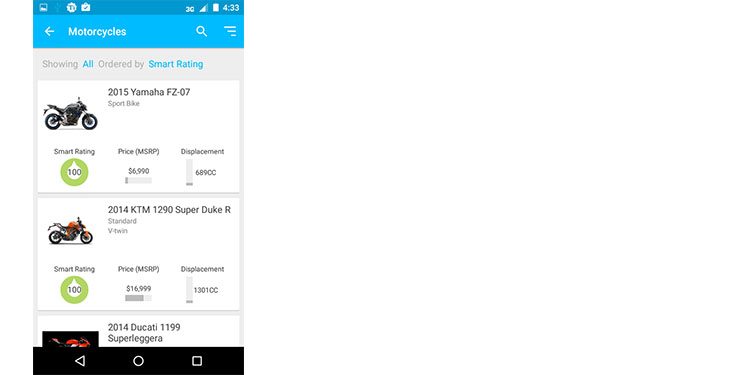 When you’ve gotten tired of the same bike or maybe you want to experiment a little before you decide to go brand new, take a look at CycleTrader. On a personal note, we’re currently in the market for a Hayabusa from Suzuki and so far, this app has been very good in finding decent prices for some used bikes. Not only can you buy but you can also list. Even if you’re dreaming, it always feels good just to window shop. 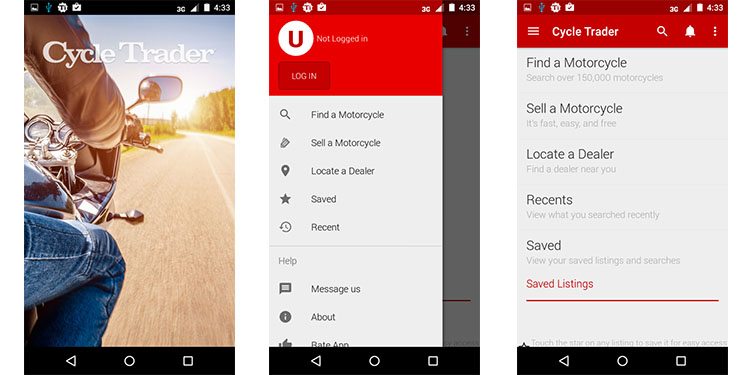 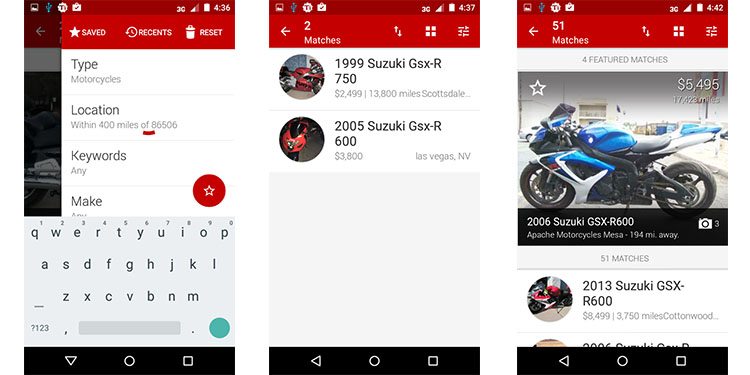 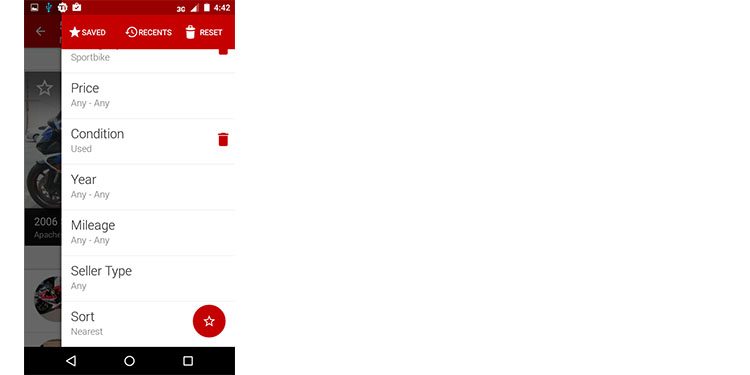 Get CycleTrader on Google Play

In a nutshell, biking isn’t for everyone, although everyone should try it once in their lives. There isn’t any way to sugarcoat the risk one assumes when riding. There is nothing cool about wearing no helmet and using flip flops to work the gearbox, especially if you go down. Seasoned motorcyclists will tell you this:

It’s not IF but WHEN you go down.

I’ve already hit the asphalt a few times myself and thankfully I was able to walk away from it. One time I had gear, the other I didn’t but I always wore a helmet. Stay safe and have fun out there.