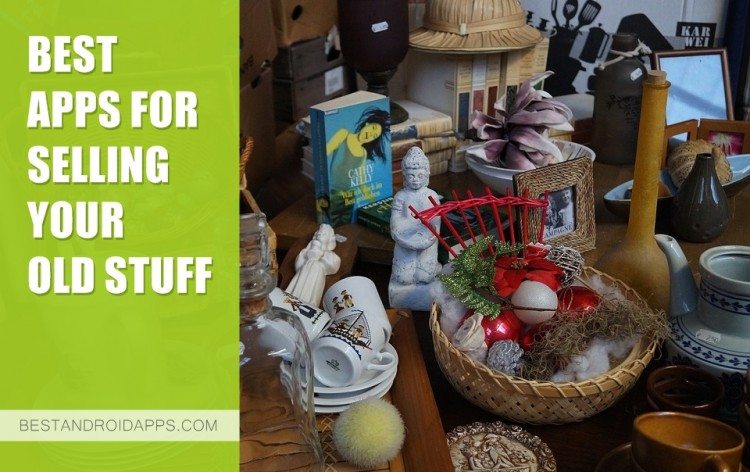 Just the other day we were sitting around brainstorming about what it was we were going to focus on and we kept tripping over old Hard Disk Drives that were laying next to our desk along with old Compact Discs and various electronic Odds & Ends. Moderate success was claimed by using the Amazon Seller Central Website but it there had to be a faster way for making payments and meeting others besides that or Craigslist. There is Facebook but then that involves another hurdle of having to set everything up with selling and buying only. We wanted something that could connect buyers and sellers instantly as well as transferring payment as soon as possible all without having to get on a computer to set it up. The more  we thought about it the more we sat on the couch distracted by inane commercials…that is…until we saw one particular commercial. 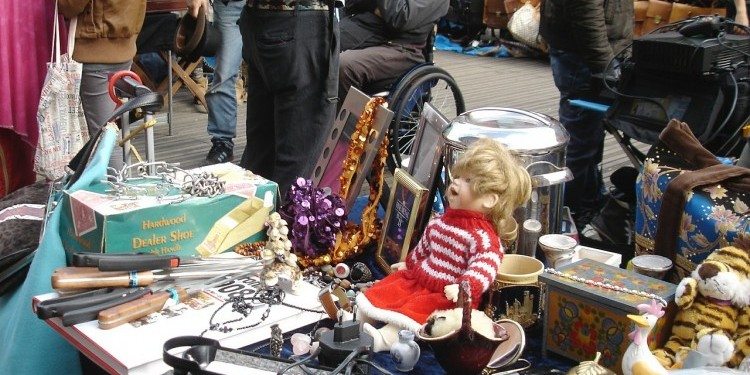 Ok so this wasn’t the commercial that we were talking about but we’ll get to that in a second. This one here is much like the next few entries. You will need to make an account first though before you use it otherwise it isn’t useful for browsing at all. That being said, the upside to having to make an account is to see exactly who you’re dealing with and having to meet them to either sell or buy, knowing who they are as well as having documentation is always a good thing. The private chat is a great addition to personal security when shopping. 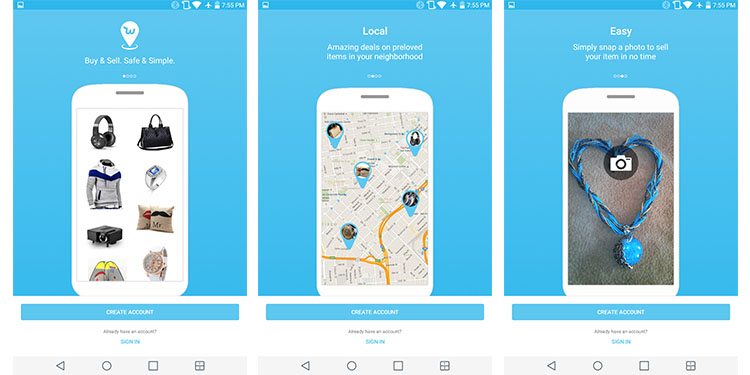 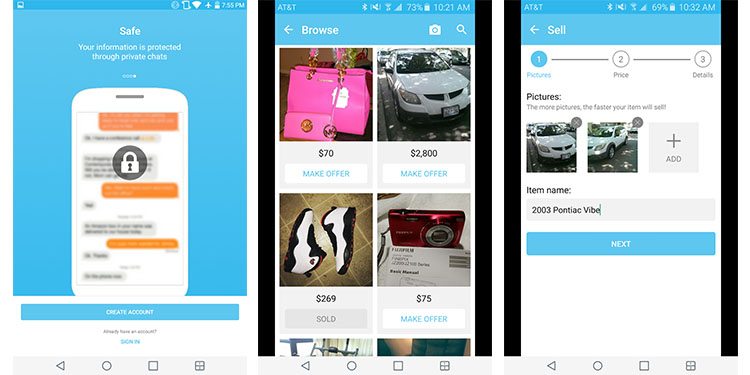 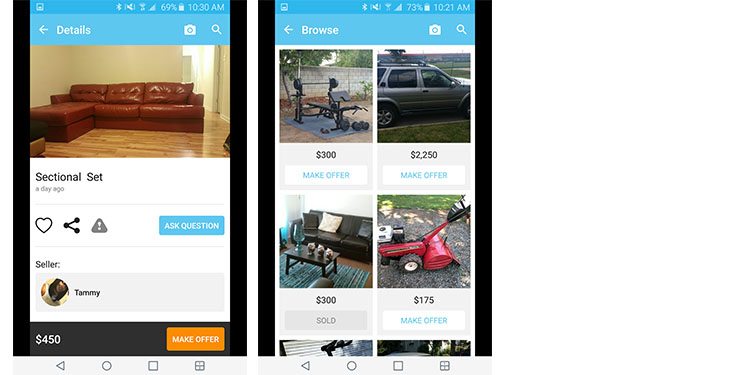 This app here is really blunt. Where we happened to be during the testing phase of this app showed exactly who was all around us that wanted to sell something. We didn’t really need a car or jewelry or what looked like paintings so we went on to the next one. 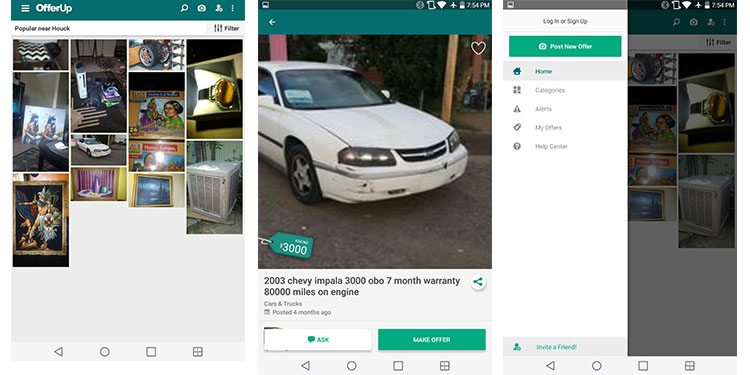 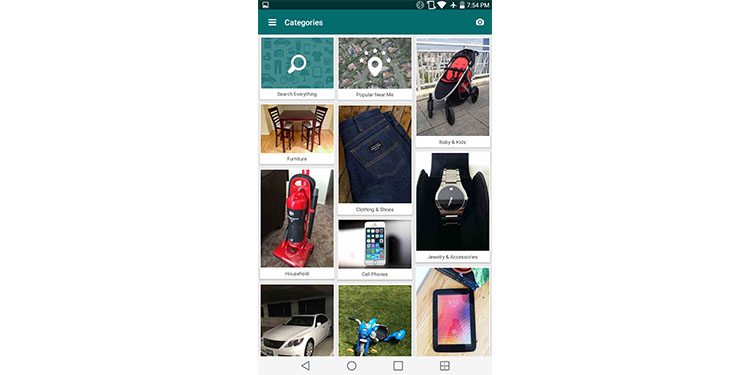 Get OfferUp – Buy. Sell. Offer Up on Google Play

Where other selling apps fail this one here succeeded. It pulled locations of up to 75 miles away for items that I was browsing. In apps like these, the variety really depends on the pool of people that you are located around. It isn’t like Amazon where you want to look for a specific product. It functions much like a swap meet where you walk around and just happen to have money looking for various odds and ends. 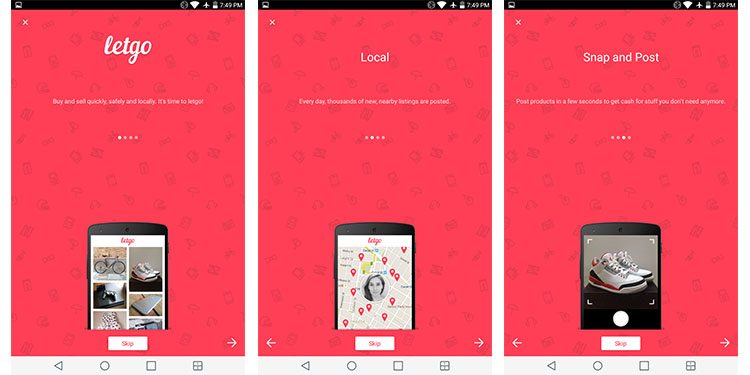 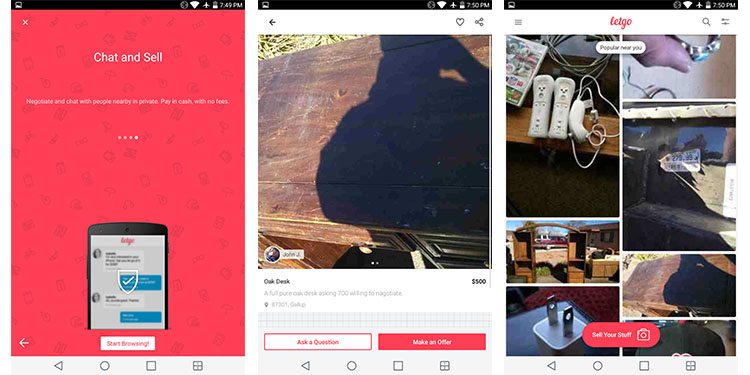 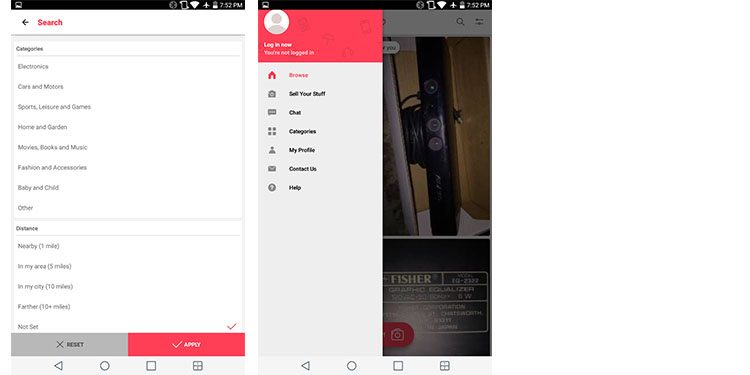 The gist of this app is that it markets “Preloved Stuff” as close to you as possible. We can only think of a few instances where that would be a really great option. If you lived in a big city where driving into the next neighborhood was a trip due to the traffic or accidents or other city obstacles then this will fit your needs perfectly. 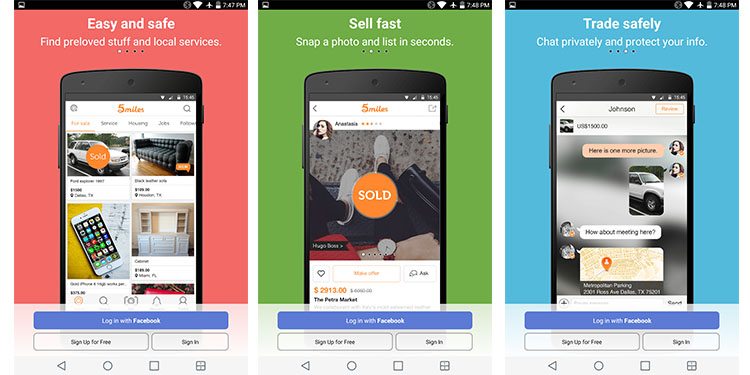 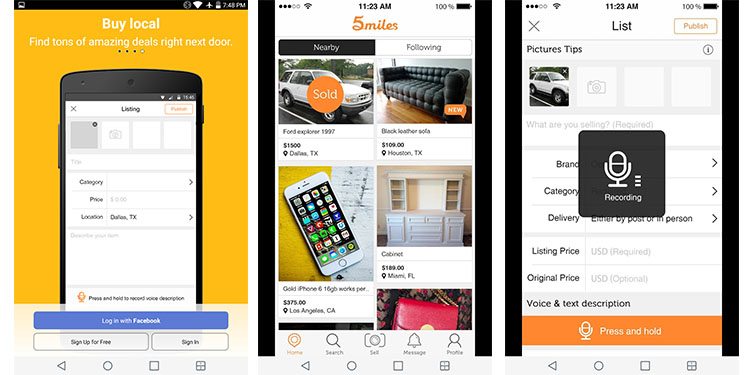 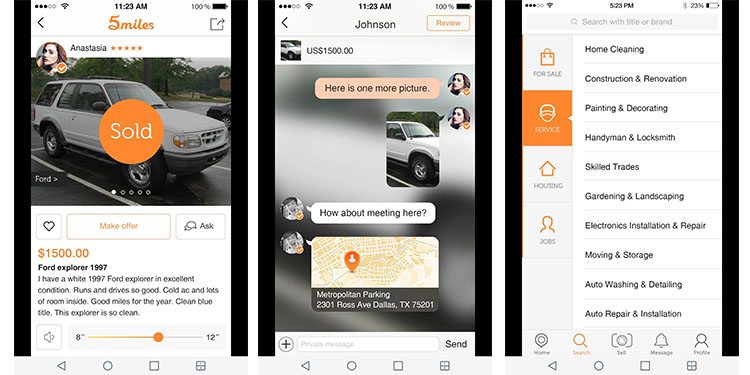 Community is taken to a whole other level within this one. VarageSale makes a play on words using Varage for Garage. There is a very heavy emphasis on the social aspect. When we think of Garage sales we think of going to the house it’s located at and talking to the person selling it. We get some backstory as to where it came from, how long they had it, and why they’ve decided to sell it. As much as is possible VarageSale tries to emulate that environment with profiles, instant chat, and a specialized cyber community membership that is a necessity for one to get the full benefit of using this app. If you can find one near you, it should make you feel right at home if you are one of those that love people and live for Garage Sales. 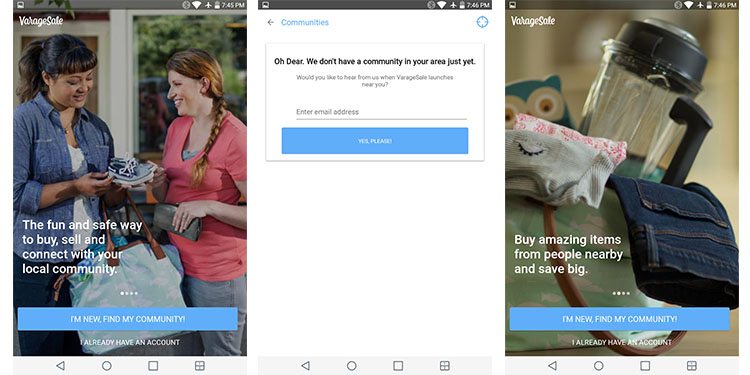 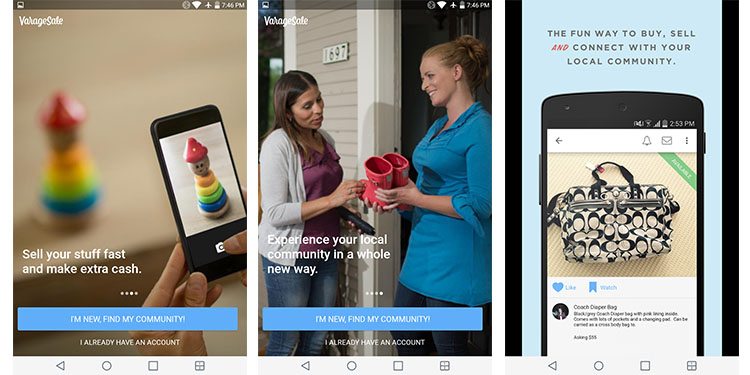 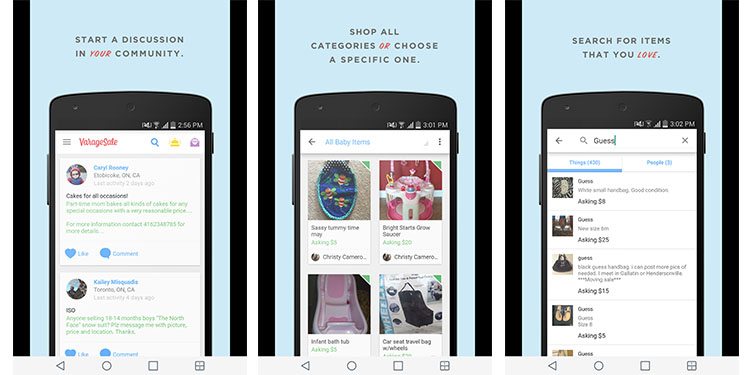 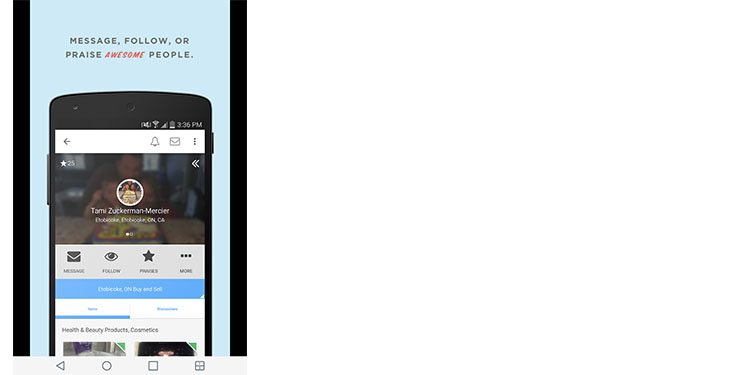 Ironic that our first inspiration for forming this article was actually featured last. In no way do we actually feel we saved the best for last. Each of the previous applications have their niche in the secondhand market. Wallapop though does this by giving you a very modern interface with notifications, collections, bulletins, and categories. The heading “New in my Area” was a very nice addition as it gives those of us who bargain shop something to ease our cravings.

To explain a great concept, the collections tab actually functions as a way to see items that are for sale in a whole new light through categories they will actually be used for. Instead of “Books” it says, “Educate Yourself.” Instead of “Clearance” it says “Spend Less.” They have everything sorted into their respective places, from Electronics, to Appliances. If that doesn’t help much take a look at their search options. It’ll really knock your socks off. 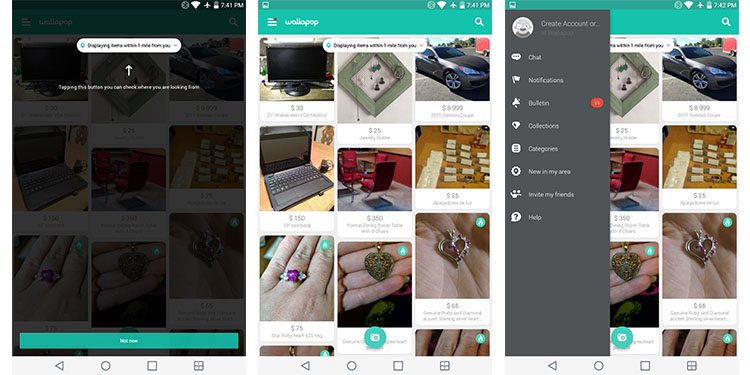 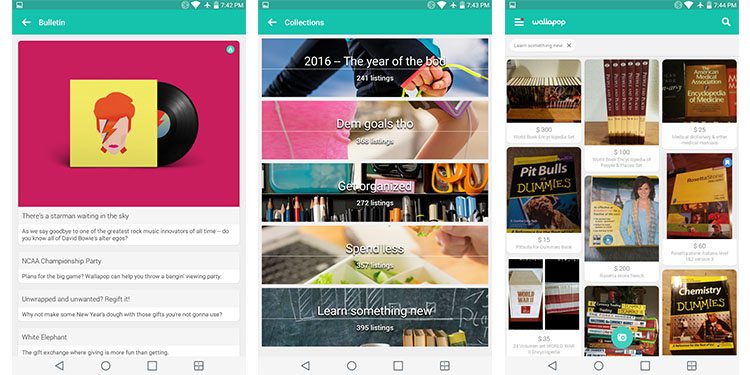 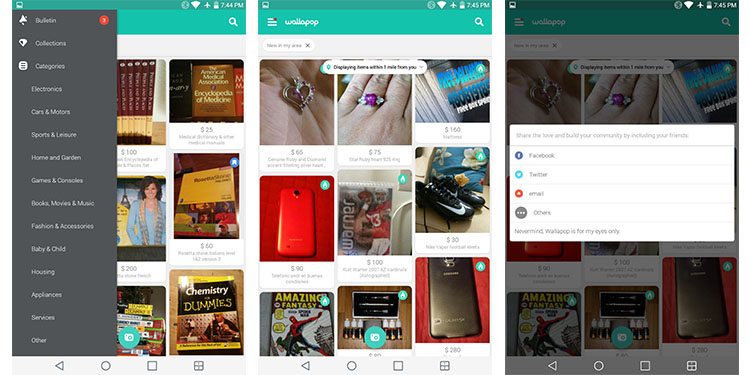 Get Wallapop – Buy & Sell Nearby on Google Play 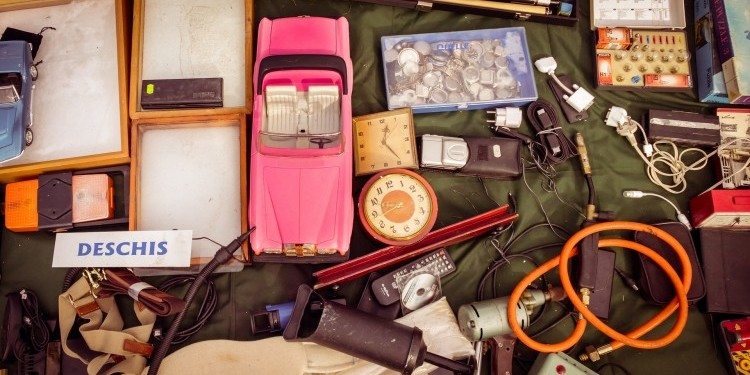 You know it’s great to use popular services such as Craigslist, Amazon, or even the Classifieds in your local paper. The problem with that is you never know exactly who you’re dealing with and the burden of keeping yourself safe is left entirely up to you. That doesn’t mean that you still shouldn’t make an effort to stay safe even when using these services above. A few things to remember:

As for why we had so many apps to sell things? There are really only a few reasons. The first reason is, everyone isn’t the same. Some value social features more than others. Some want a closer basket to deal with especially those that live in cities. The point is, people have their own idea of what they decide to use. We did not find any duplication of sellers across all of the apps we reviewed. That tells us that casting your net wider will give you better prospects, and that people don’t want to carry over their listings from one service to another so you really do get more results with more marketplace applications.