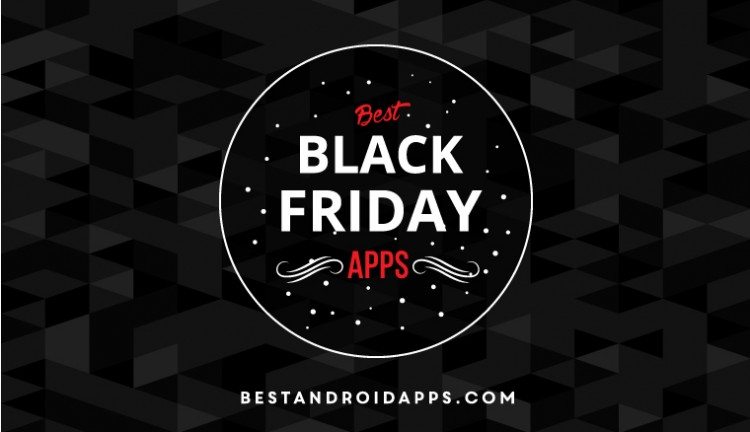 Here are the Four Best Android Black Friday Apps available on the Google Play Store. Normally we wouldn’t be releasing a post about best apps for an event so close to the deadline but Black Friday has always been shrouded in secrecy. App developers have a limited amount of time to make a User Interface, write the Code, and input Data from the various sources all over the internet. These holiday apps are written in a rush so waiting until the last minute to see what app is best is good policy. 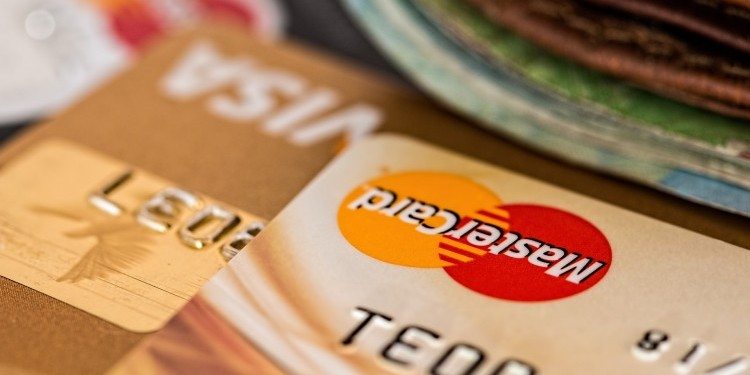 We absolutely loved this app!

From the smooth Material Design to the inclusion of store logos for easy recognition, we get the option to do several things. First we have the home screen with featured news. This is followed by a scrolling menu with additional news relating to sales, shopping, and events just below. To the right, we have the store lists. They range from semi-fab Macy’s to utility-based Walmart and everywhere in between all arranged alphabetically for easy selection. 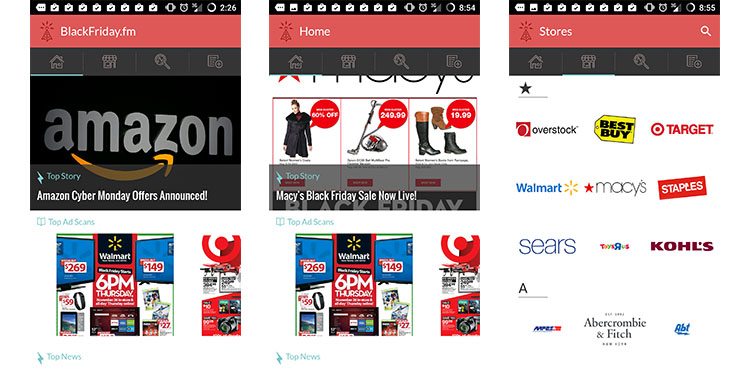 If stores aren’t much on your list and you happen to be looking for a specific item you might want to check out the Catagory list, they have all types of item groups such as: Arts & Crafts, Bed & Bath, Coupons, and more. Another swipe to the right gives you a wishlist for specific items you’ve bookmarked for later. 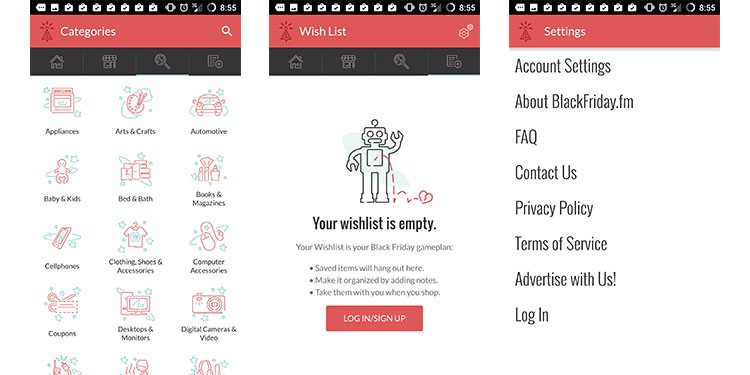 This remains our top choice because of the ease of operation, the quick response time, the simple layout, and the news bar for late-breaking Black Friday news.

“BEST in image and search integration! This is my favorite for at least 4 years on a row, and best image/scans integration ( not clunky Web browser sessions). Also best in searches! !!” 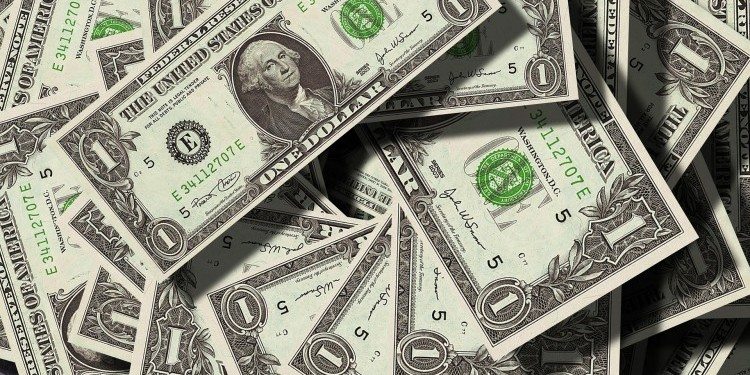 Second in our series of Best Black Friday Apps is this little number from BuyVia. It has a similar layout to the our first choice and it would have been our first choice but it lacks a News Feed. 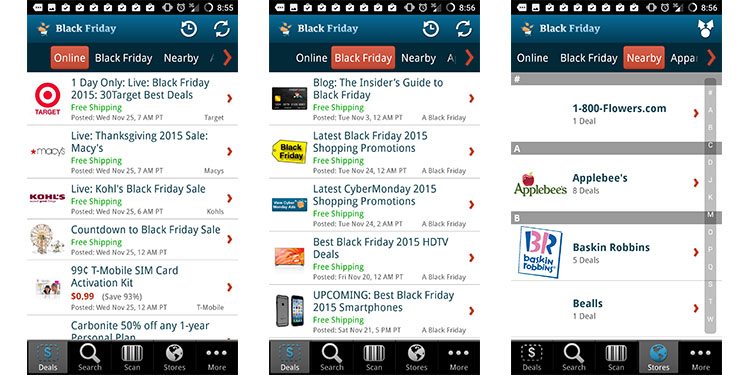 This is made up by having a Barcode Scanner to compare pricing to other stores in the area. It also carries a distinction of having a tab solely for Online deals which may or may not be a problem to those looking around. We can see how someone wanting to get into the shopping action and stay out of the crowd may want this option. Advice: if you’re out in the street running from place to place online deals tabs may confuse you a bit. 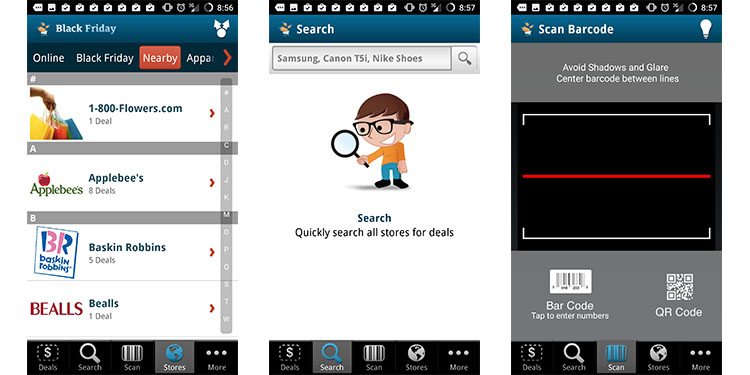 As with the next choice it does have a local tab as well. Categories in this one are arraigned after the nearby tab which may be a bit clunky for some. You can also make shopping lists and alerts for items. 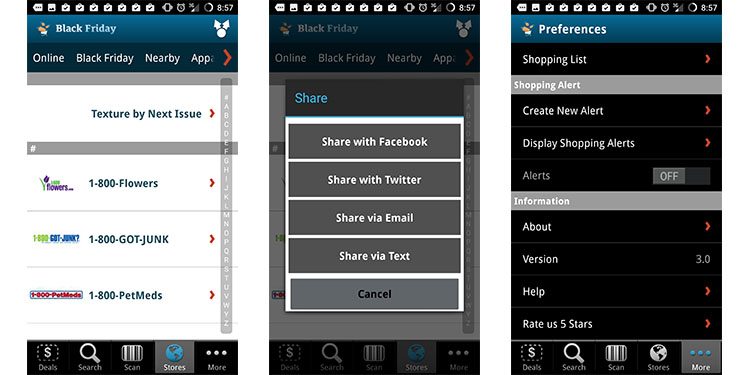 “Black fridays ads How can they get all the ads before Black Friday? Now I know what’s on sale without having to buy a newspaper”

Third in our running for best Black Friday Apps is right here below. It features Ads that are displayed after clicking on a retailer, Deals that can be catagorized by location being either online or local, and coupons. 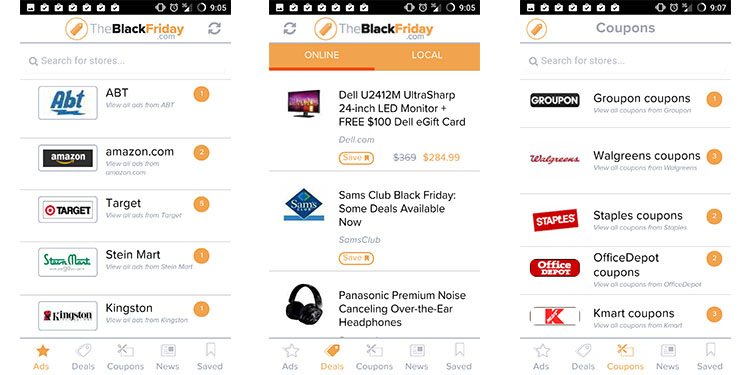 The reason it stays in the best Black Friday Apps albeit in third place is because of the all important News Feed (our second choice lacks this feature but it does have a few extras to make up for it.) Why is the News Feed so important? We’re a connected society. We need to know what’s going on the second it happens even as we run  from place to place. We would love to avoid opening up our web browsers all the time. 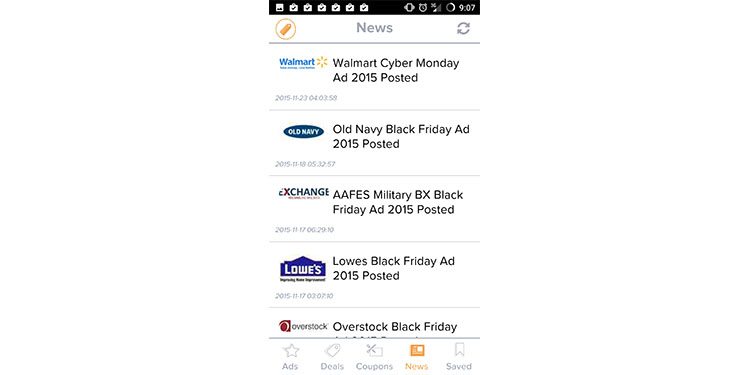 “Good informational app Awesome tool for seeing deals and store hours. Save deal feature is kind of cool too.”

Black Friday by Brad’s Deals’ layout is very refined. It manages to make us feel good about spending money. Looking at this setup we actually thought about our buying items as a form of investment. What better to help manage your investments than a simply designed app with an elegant theme? We have Ads, Deals, and News. Nothing more, nothing less. 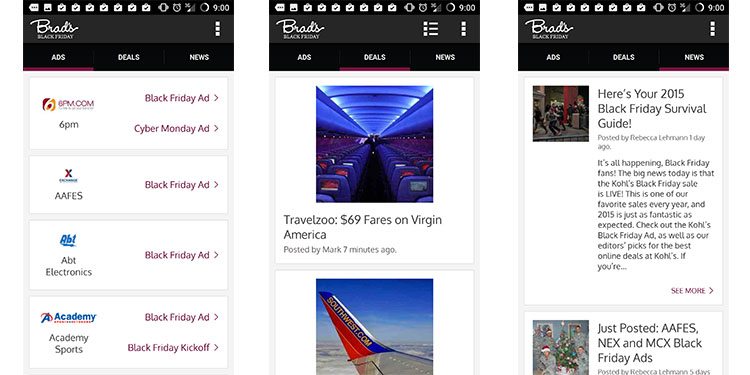 “Best Black Friday App EVER!!! This app helped me navigate the confusion and categorized everything SO well!!! I even got my friend and family to download it because it’s truly super user friendly AND FREE! Thanks!!!”

Get Black Friday by Brad’s Deals on Google Play 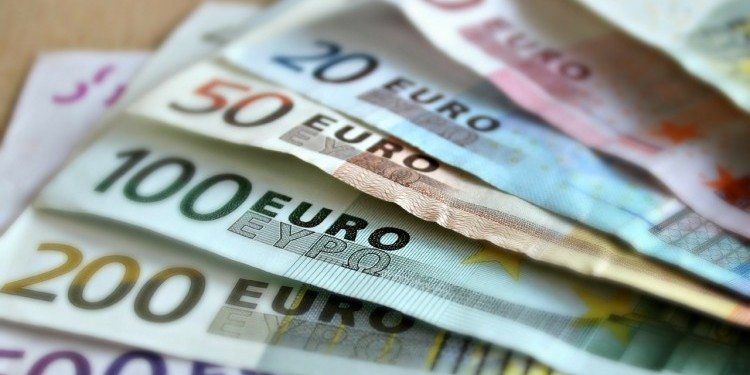 Using apps is questionable when out looking for deals on Black Friday–this we understand. What some have to remember is: When we’re out there, the last thing we want to be doing is fiddling with our phone. The charm in mobile apps are convenience and speed. They use a whole lot less data than webpages; they load faster–saving us time, and they have a simple interface that’s optimized for one handed operation. Android Apps though have always been tricky. It is truly hard to find a good one when Android is so open and encourages diversity with it’s products.

Hopefully we’ve helped you cut through some of the chaff this shopping season with our selection of Best Black Friday Apps. Go out and buy yourself something. 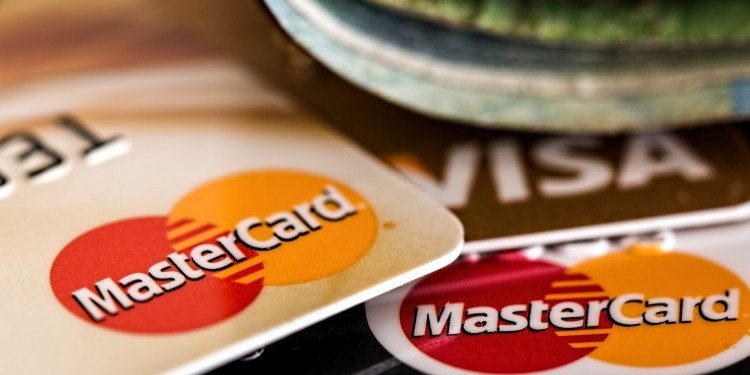 Five Apps To Up Your Nursing Game