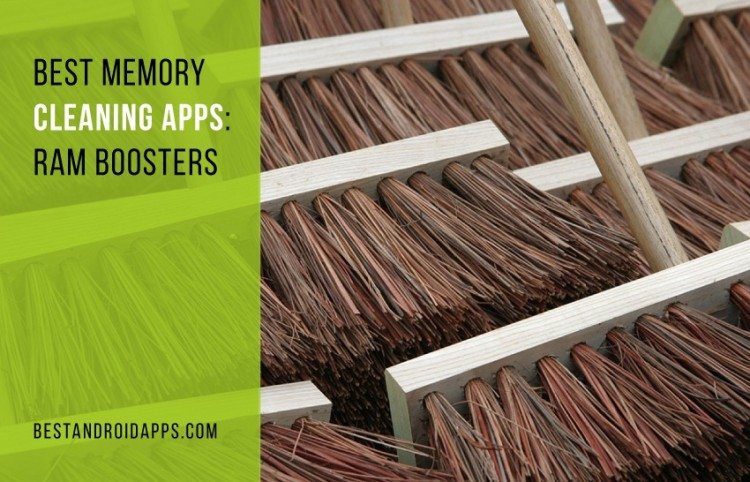 This topic has been argued for and argued against since the very beginning of Android. I know the main reason you clicked on this post was because your speedy phone became slower than a snails at a race–for some reason… right? If RAM is one of those things that’s hard to understand, don’t feel bad, not many people understand what it’s about really. Here at bestandroidapps.com we’re going to explain it as quickly as possible.

What RAM is and isn’t

RAM stands for (Random Access Memory). There are 2 types of memory in phones. The first is your Storage which is called–usually:

Yeah, a lot of terms for the same thing.

The second type of memory can be thought of as a temporary scratch pad. If a textbook is your permanent storage memory, then a sheet of paper that you take notes on is the temporary memory/RAM memory.

When you see a phone on sale through your carrier or on the rack and you see 8GB of memory and 2 GB of RAM, you’re seeing the amount of storage for apps, songs, video, or personal documents, AND the amount of “scratch paper” (a.k.a. RAM) your phone can use.

This scratch paper/RAM is the storage that your phone will use to keep apps and other processes you are using “Half-way Loaded.” This means Pandora for example will stay running in the RAM until 1 of 3 things happen.

So why doesn’t your phone just quit every app when you exit out of it?

Have you ever hit the back button by accident and quit your browser only to wish you hadn’t? When your phone keeps these apps in RAM it does this so you can pull it up in your recent apps quicker. If it killed every single app you exit out of then your phone would burn more power trying to reopen the app again. If it’s still in RAM then it comes up faster.

Another reason is because you have certain apps that stay running behind the scenes like ad blockers, battery savers, and downloads like in the Google Play Store.

How do we balance this out?

We want a fast phone but we also want one that does what its supposed to.

Enter in the RAM managers. Now Android has it’s own form of RAM management but it doesn’t do a very good job sometimes. Even worse, being on the run and having to clear all your recent apps out is cumbersome. Sometimes we need things to just work the way they’re supposed to. Unfortunately this isn’t such a fast process if you’re already having problems with a slow phone. Each operating system is basically the same but the problem comes in with each manufacturer. HTC, Samsung, LG, ZTE, and Motorola–among others–have their own software they put on a model specifically to make their product different or “better.” Sometimes all that does is fudge up the way it works. To make matters worse, we have specific carriers that put further resource heavy software to add to their “customer experience.” Spring, Verizon, AT&T, and T-Mobile do this.

Is there a way out?

You really have a few options, one of them is really complicated at times depending on your phone model and if you don’t already own the phone it wouldn’t be a great way to go about things. It’s called rooting and installing a custom OS onto your device’s system partition. The second option is going to be using the features within certain RAM boosting apps. Whether they’re RAM boosters or Memory Managers or Cleaners they’re basically the same. Some are easier to use than others. Here are a few of the best ones we’ve found so far.

This is going to be the best in our opinion. We’ve been using this for about 3 years off and on now and it has a few great features. We could have done without the fancy graphics but that adds to its charm. Upon starting you are given an dial reading of Storage and RAM. Under this is a few subheadings with Junk Files, Phone Boost, Antivirus, and App Manager. Phone Boost is the same as clicking on the RAM dial. We’re taken to a readout with the temperature of the CPU and the applications that are running at the time. Some of these apps can be killed while others are system apps that can’t be shut down. 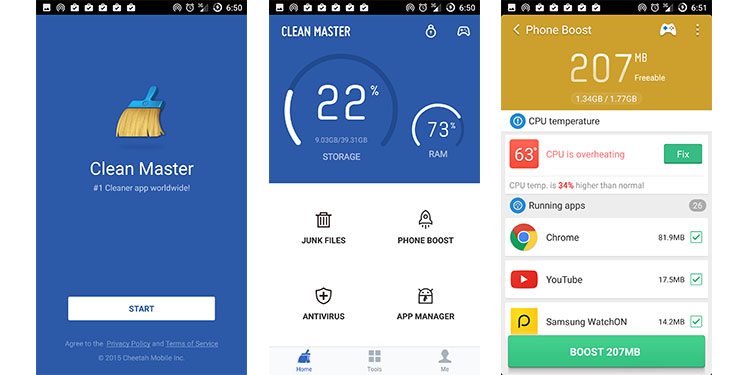 When you choose to press boost you get another readout of how many degrees the CPU has dropped. 2 Degrees may not be a big deal but dealing with such a small space within the phone we’ll take all the help we can get. 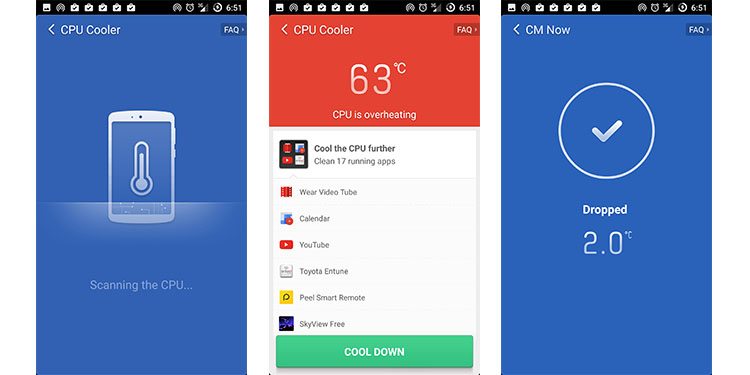 As it continues to cool down, looking at the settings we see a few options. The most useful of these is the Auto Kill section. We can kill apps at screen off, show the results, set a reminder when RAM is low, reminders of frequently restarting apps, and CPU problems. 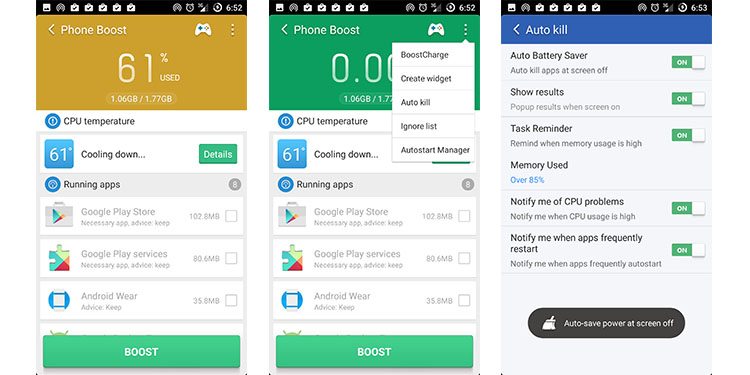 We can set the amount of memory used to a different percentage if it fits you better. Under auto start manager we have the ability to prevent those apps from auto starting. 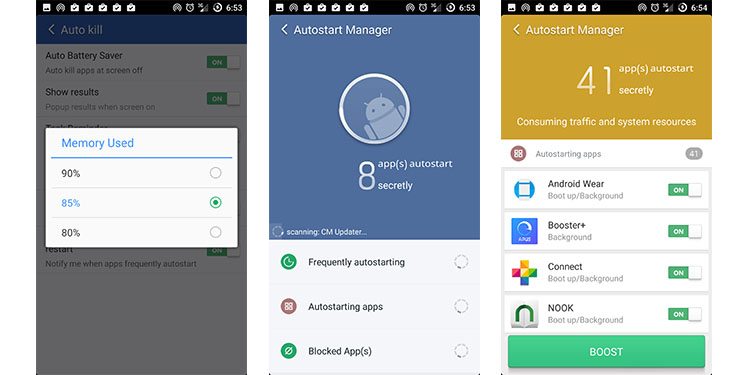 The only caveat is, you need to have a rooted phone or have a custom OS. I have a Samsung Galaxy S4 that’s been rooted with Cyanogen installed but what’s been known to happen are bugs from the internal root manager. SuperSU tends to do a better job at granting permissions. If you have a rooted phone however the options get better as you can disable programs you don’t use entirely even if you weren’t able to before you rooted. 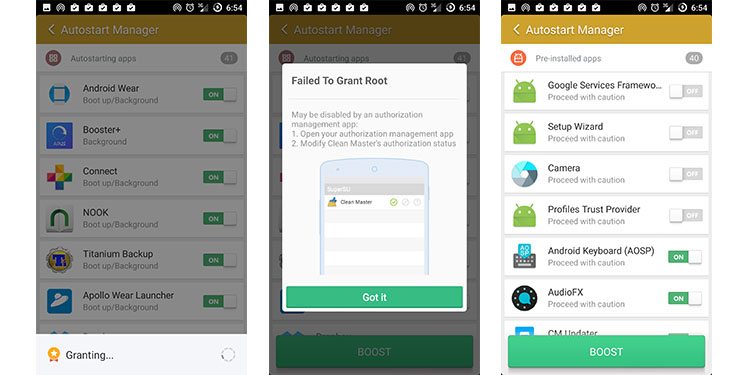 At the end of the tour we get a little icon that acts as a widget with a one touch operation. 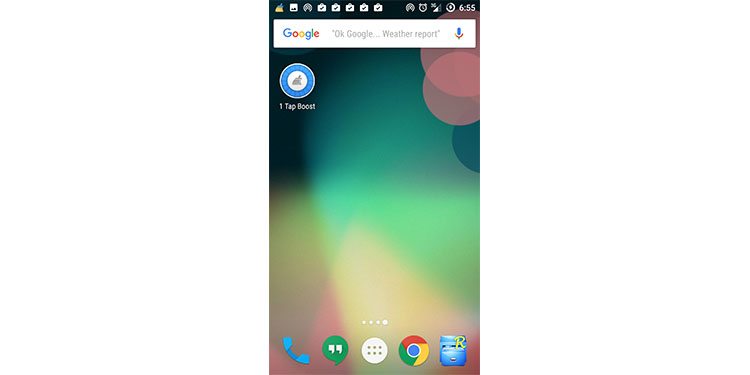 “So Fast. Cool UI Love the different features, very efficient. 😍 😍 the upgrades. Install on all my devices. Keep up the good work. Love it”

Get Clean Master on Google Play

This is the second choice in terms of usefullness and ease of use. At first launch we are given the option to enable a booster in-app feature. 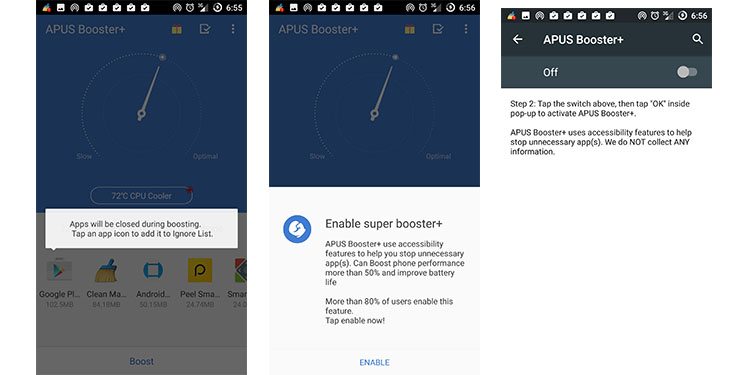 Again like the cleaning app from Cheetah Mobile, we see the same sort of graphic representation of CPU temperatures and the ability to cool it down by reducing usage. 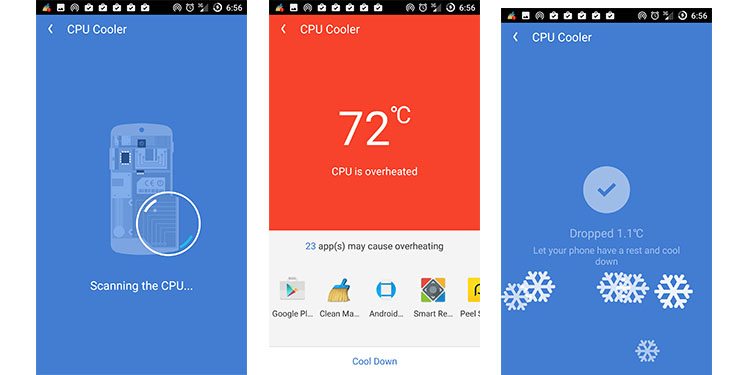 Now, something that we haven’t touched upon yet are the all important settings for any sort of auto kill application. As we mentioned before, Android keeps certain programs in memory in order to readily access them later when you need them. This adds to ease of use, speed, and power saving. The problem is when those apps are rarely used again and take up an unneeded amount of system resources. Enter in the Ignore function. If you understand that you use a few applications exclusively throughout the day then adding them to the ignore list will further add to your overall experience within Android. For instance, let’s say we use Instagram and Twitter all the time. We can add them to the ignore list and keep them running so we can continue to get updates and open the app quickly if needs be. If we didn’t have them on the ignore list then they would get killed along with everything else that gets shut down. 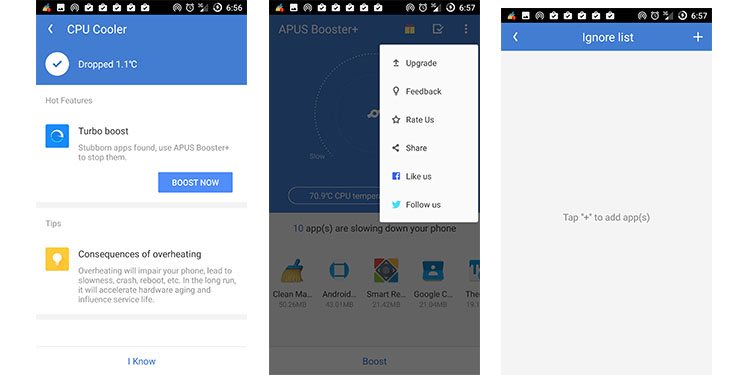 Clean Master does the same thing here. They have a list of sponsored apps that they advertise in order to fund this entirely free program. If there is an option to end the ads then I would take it, but be aware that they are system RAM cleaners that operate alongside other programs and as such they may also suggest them to you. Some apps do this better than others. As with Clean Master we get a widget icon at the end. 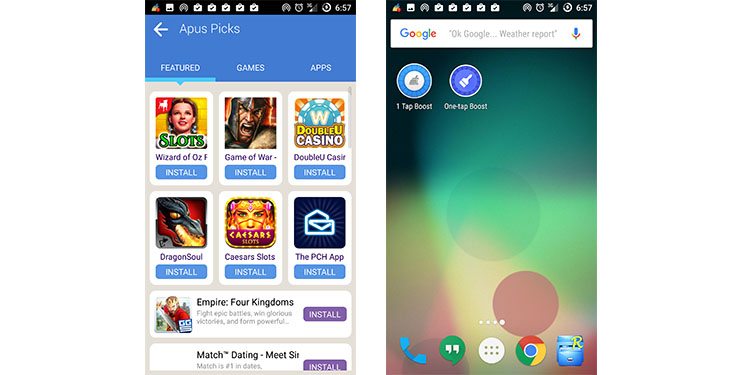 “Very good app I saw the results immediately, even before disabling the slowing down apps on my phone. I was one step away from upgrading my phone due to its poor speed. Now I can stay with my old phone.”

Get APUS Booster+|Speed Up Phone

Back when I first started this stuff with my Droid X2, I used an app that cleaned my cache and claimed to speed things up. Over the years I noticed this being added to with various components. Today we have quite a plethora of complex workings that usually are interdependent and need each other to function. This app is very straightforward and if you don’t have time or you feel like you never use one or two apps specifically this may be your answer. You open it up and you are given the amount of memory used, tasks, and the ability to boost. It won’t kill system processes so if you need something beefier that utilizes root permissions this one isn’t for you. 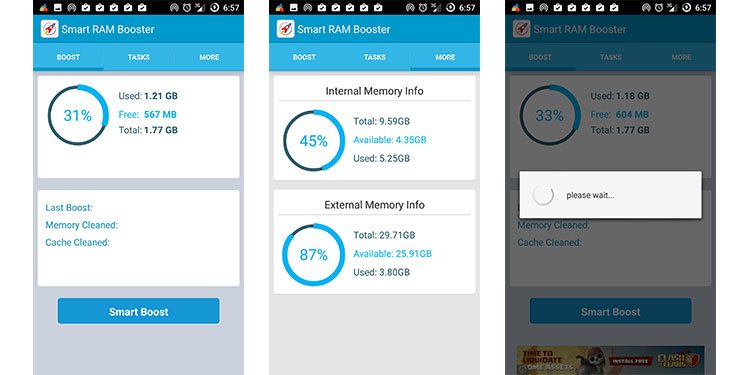 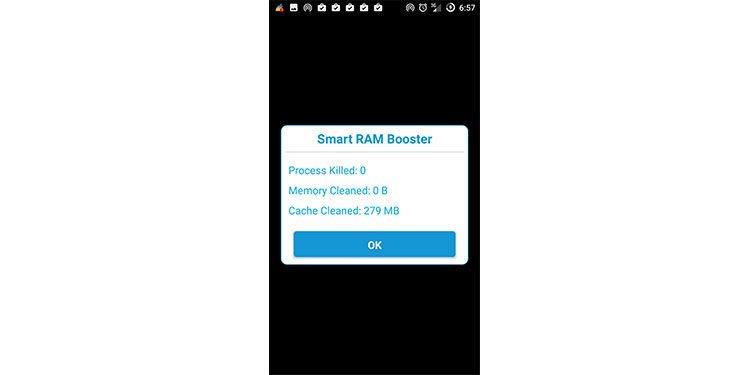 “Smart RAM Booster is the best memory optimizer out there.. I like the Small app footprint compared to other booster”

This is in our top four because of the amount of options that it gives you. If you have some time to sit down a really get to know this app it has rewards waiting to be applied. 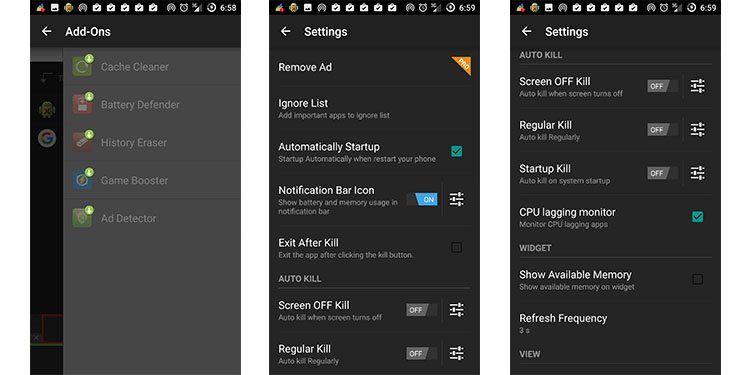 At the start, you have auto kill options. Screen off kill is probably the best as many background options happen when your device is asleep. it has options that give you a delay time, or specify apps that need to be killed. Again this comes back to the part where you should pay attention to what you use the most. Under regular kill options we get a setting that dictates the freqency of app killing and again to differentiate the specific ones we want to kill or keep. 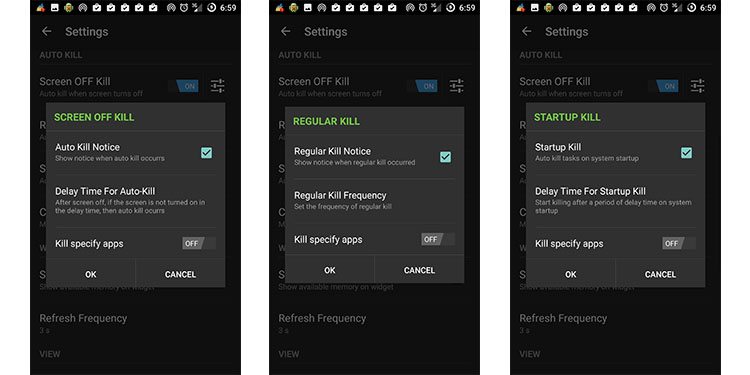 For this being an “New” UI it does seem sort of dated like Android 3.0 Gingerbread. 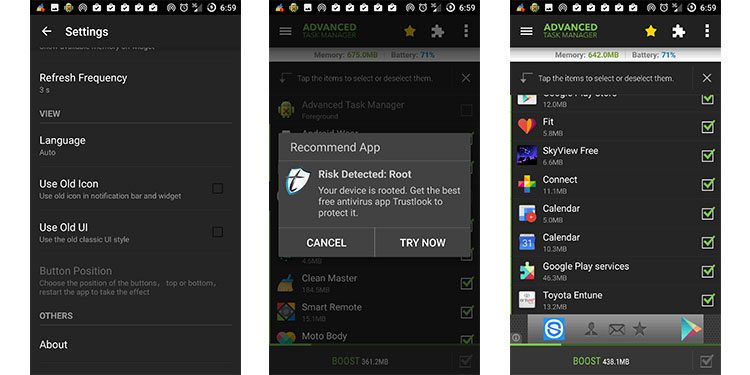 Again there are ads but that is easily remedied by buying an ad free license. Under the settings we get the Frequently Asked Questions (FAQ). FAQ’s sometimes ask stupid questions–as we all know–but knowing how an app operates is the most important feature. We wish there would be an explanation closer to the start but if you don’t understand how to use it then you’d probably go the some sort of help tab and there you’d see the FAQ. 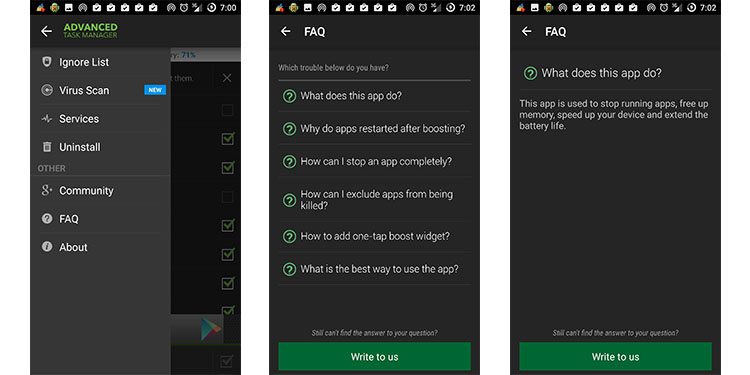 The questions are fairly practical. 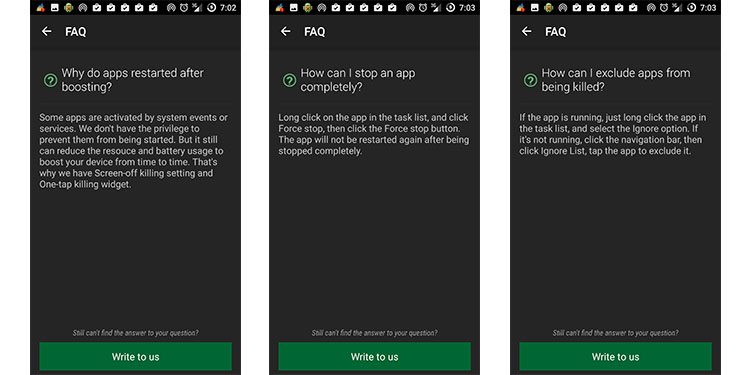 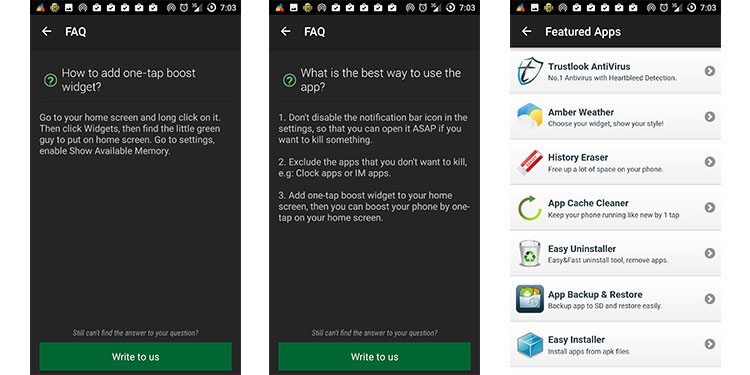 “As it promised Kills unused apps so I can play Grand Chase, Modern Combat 4, etc. A must-have”

While RAM might be a complex topic to understand what we do understand is the basics. We know we need RAM for apps to be in storage or scratch paper for faster access, we also know that we cannot always foresee when Android will keep an app that we never use in RAM which is what slows down the whole experience. The best way by far is to have your phone rooted with a custom OS but if you can’t do that then try one of these 4 applications. If we had to suggest just one, we would pick one of the first two. The most important thing to do when you first get it opened on your phone is to set up the auto kill options. This way you have the best of both worlds, you have more control over your device as well as the automation of technology. If you happen to want to know more about rooting and installing custom OS’s then leave a request in the comments below!

Best Star Gazing Apps to Lose Yourself In