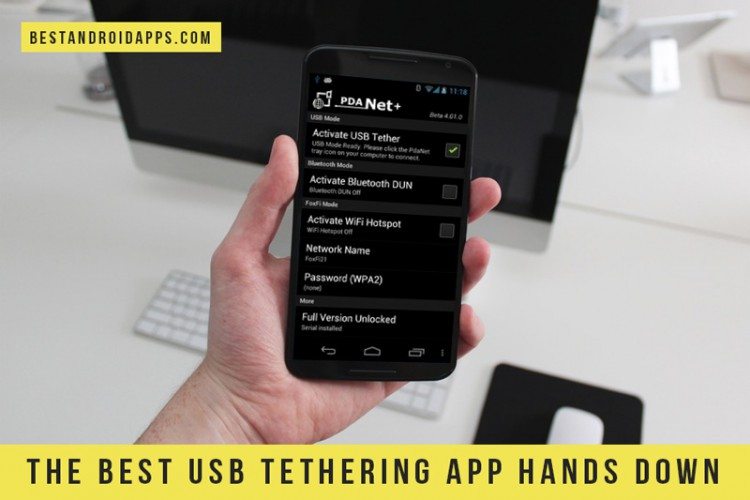 PdaNet+ now contains both PdaNet (USB or Bluetooth mode) and FoxFi (WiFi mode, may not work on your phone – details below). You can now share your cell phone’s Internet connection with your computers or tablets through either USB, Bluetooth or even WiFi Hotspot on some phone models. Most importantly it does not require the extra tether plan (mobile hotspot plan) from your carrier. Also NO ROOTING NEEDED for your Android phone. USB mode works on almost all Android phones. It allows connection from Windows PC or Mac. In addition, PdaNet comes with a “WiFi Share” feature that can further turn the Windows PC into a WiFi Hotspot so that you can connect other devices to it and share your phone’s Internet connection. Bluetooth mode allows connection from Windows PC, Android tablets (excludes Android 4.4) or devices that supports Bluetooth DUN. Due to lockdowns through each phone system update, WiFi mode will only be allowed on a short list of compatible devices.

Why expose this great app?

In our bumming around we’ve done all manner of things to our phones. From tearing out its guts in efforts to swap USB charging ports, to heat gunning the screen in order to peel away the digitizer glass to rooting, booting, customizing other OS’s and still yet we come across one app that despite it all delivers what it says it will. This doesn’t mean that it’s perfect by a long shot. However in an age where we are getting the short end of the stick with mobile technology again and again we have to wonder if this too–will at some point–go the way of the dinosaur. We worry that we won’t have any tethering options left. The debate will be raged over and over as to what type of data we pay for can be utilized. We wouldn’t think most carriers would appreciate this application. So it’s with heavy trepidation that we chose to cover it. The upsides don’t outweigh the downsides especially with affordable faster internet becoming more and more commonplace. We considered all the people that live in areas that don’t get fast internet. The constraints you currently have are going to be limited by your total data plan on your phone anyway so there’s not much risk unless you’re going gonzo with Sprint or their subsidiaries.

The setup with this is surprisingly simple. If you have yet to give this a shot then go right ahead, you need not be a techie to figure this one out.

Downloading the app, opening it, and giving it a go is pretty easy. The first thing you’re going to want to do is go into your phone info screen under settings and look for the build number/version. When you find that, tap it several times until developer options are unlocked. From there, enable USB debugging. When running the app for the first time you’ll be greeted with a small popup that asks if you’ve downloaded the Desktop client for the program. After you do that, run the downloaded program and follow the onscreen prompts. It really is just as simple as can be.

We will warn you however that using this for a full on internet source for your home is not encouraged and hopefully if you would do something like that, don’t be conspicuous like using p2p services or if you must, USE A VPN. There are plenty of free VPN’s for your desktop. Just because you have a VPN on your phone does not mean that it will work for your desktop.