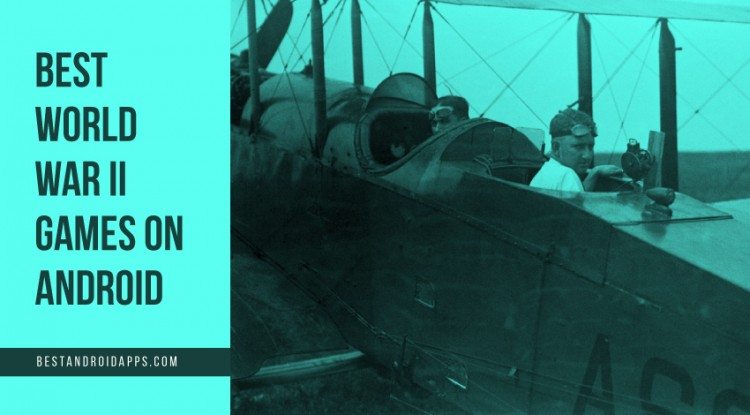 Many youngsters won’t remember the advancements in First Person Shooters stemming from Doom and Wolfenstein 3D. I would wager most only think of Call of Duty or Battlefield. So, for those that don’t know, historical shooters started in the 90’s. They continued to get better and better. Then for some reason…they just dried up. Even Call of Duty started off in historical warfare. We’re here to say, that era is very much alive and well. For those as old as me or those just rediscovering the genre, here are the best World War II Games on Android we could find.

Something that we have to touch upon before we begin are the differences in the games we have for mobile and those we have for consoles. Most mobile platforms have no upfront cost to play. As you get further into the game you at some point either have to grind to gain experience & items, or you can pony up and use real money to gain an advantage in-game.

There are a few things that I personally do not like about this system. You can never tell if the game is worth it. Eye Candy is limited by the Graphics Processing Unit in mobile devices. So one can’t expect too great of a show unless they own a high end phone. Once you download it you have to deal with advertisements and sometimes intrusive, irritating notifications on your screen that demand you play again. Gone are the days when we could spend twenty bucks and buy a great mobile game (were those days ever really there to begin with?).

Whether it’s a thing of this generation or not, it’s started to carry over to both console and PC gaming in the form of Downloadable Content (DLC’s). Regardless, it’s becoming the norm and we have to adapt.

This was highly regarded as a great title by those in Google Play. Glu has a tendency to make great games. They’re close to the same quality of their titles that Gameloft puts out. This one here wasn’t that big of an app and it didn’t take that long to download.

The controls were smooth, well placed, and we had no trouble just picking it up and playing it. We loved it, if we had the time we’d probably stick with playing it.

This reminds me of PS2 Graphics.

“Awesome Game!!! From moment one this game had me hooked. Great graphics and storyline. Get the game and get ready to have a lot of fun killing Nazis..lol.”

We mentioned to another writer that this game looked a lot like it had the same artist from Plants vs. Zombies. The layout was simple enough to just play and it’s more strategy than action but after awhile it began to grow on us.

“Nice Nice game. It looks Simple but difficult to master.”

As far as gameplay goes, this one sits between the first two. Half of it sits in action while the other half sits in strategy. The strategy comes in when we had to plan how we spent our money in upgrades to our boat. Rather than relying on an overhead view like in RISK, we’re given a third person behind-the-ship perspective with a very cool movement factor using the gyroscope in our phone. As we tilted our device, the environment moved with us. This helps to aim and steer if you so choose.

A little long-winded but overall it’s a fun title.

“Awesome Really fun. Controls take some getting used to, but it’s great once you get the hang of it”

While this next section isn’t so much a straight mobile game we do understand that Android is an incredibly versatile system with so many things to customize and ways of interacting with your phone that remain undiscovered–partly the reason we’re coming up with all this great content lately.

With respect to this we have a game that focuses on a cinematic experience with minimal intrusiveness. It has to be played with Epsxe.

The following tips concern anyone looking into this method for their own use. It’s heavily dependent on them actually owning the game. Personally, we bought this game a very long time ago. We know its in our things somewhere but we do own it. That being said it’s in a legally gray area. We take no responsibility. You were warned. Information is impartial.

This may have one tenth a point less than another similar emulator on the Play store but it seems to have better compatibility with PSX games. You have many options and the app itself isn’t against any laws–otherwise it wouldn’t be sold. What is needed though are copyrighted Bios files. The traditional method is to dump your own specific console’s Bios file. Specifically SPH-1001. If you have a console we’re sure there are other ways of getting a backup of the Bios file that we’re sure you’ve dumped on your own already.

“The Best I refuse to use any other Playstation emulator. This one is simply the best. Hardly ever crashes and runs basically every game at full speed, no problem.”

Get Epsxe on Google Play

Other ways I’m sure exist:

Get Backup Files – Emuparadise -for a PSX console you must own

Not entirely Android, not entirely not android. Double negative aside, it’s a strange creature. Why it has not yet been ported over to Android is beyond us but if you can stomach waiting for the 500 MB download file, and then using ZArchiver to unpack it, here it is. It remains one of the very best Story Driven World War II Games that can be run on Android today.

Keep in mind, the onscreen controls are a bit hard to work with so an investment in a MOGA controller or similar bluetooth controller is really encouraged.

Get ZArchiver on Google Play

Sure, we’re reenacting shooting people and on a fictional level, we’re leading armies toward a goal that has already been played out with real human lives. There are two ways to look at it. Either we’re marginalizing their sacrifice or we’re honoring their service. The same could be said for movies. A step further we can apply that to books. Maybe we need something in our lives to achieve, to experience, or to just have fun. Sometimes reality gets a bit too real. Take a moment to hit the play store for a few games and check out of your reality, even if it’s just for a few hours.