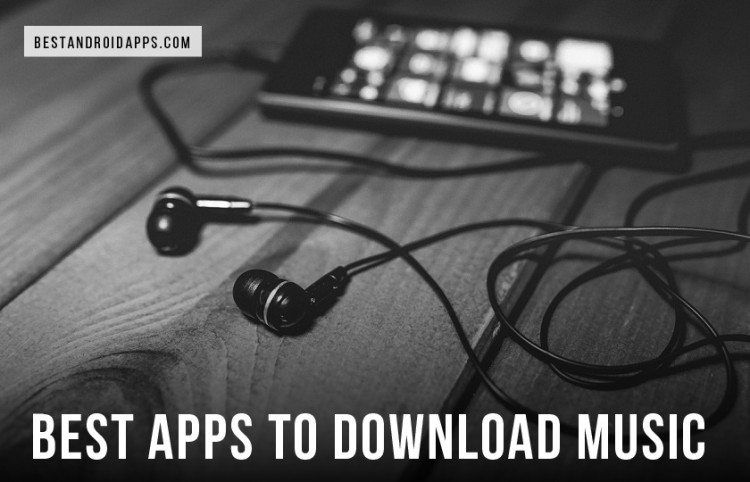 Music Downloading Apps… Should I or Shouldn’t I?

This question really depends on your scruples. With a fair amount of moral maneuvering this isn’t too much of a problem–at least with myself. While we don’t advocate doing anything that might be considered “Legally Gray” we do advocate finding out for yourself what tool best fits the job and of course, making sure you know what kind of job it is you’re doing. It would be nice to make an extensive list of all that is out there but we chose to give you what “just works.”

First off we have the heavy hitters, heavy–legal hitters that is. The fact that Amazon boasts smiles from a-to-z through their very logo sets the bar pretty high for all players involved. Added benefits include being able to upload over 250,000 songs which happens to be 5 times what Google Play offers.

Uploading isn’t the name of the game however, we called you all here to discuss downloading.

What we know is typically,most hosting services such as Amazon, Google Play, and Spotify offer the ability to download songs for later. The problem is, you can’t utilize this service unless you subscribe to their paid service. 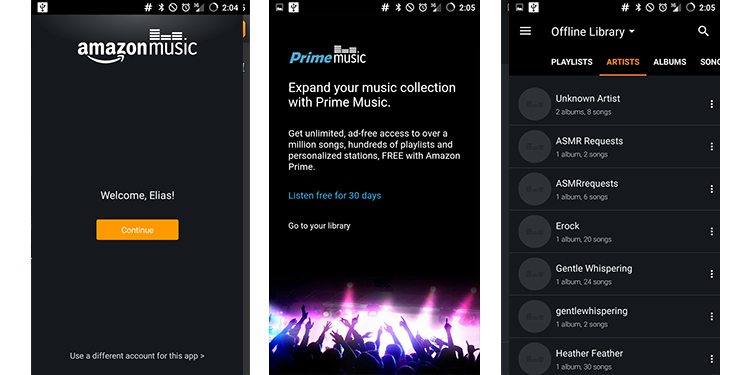 There are really two distinctions when we consider what it means to download music. Are we talking about downloading music in some form of Digital Rights Management (DRM)? Or are we talking about music that’s DRM free? With Amazon we have DRM free tracks. After opening the app, we are given an option to use their Prime Music selection that’s free with a paid subscription to Amazon Prime. This may or may not be up your alley as Amazon doesn’t have much to offer in terms of sweetening the pot for using Amazon Prime Music what with only 1M songs? 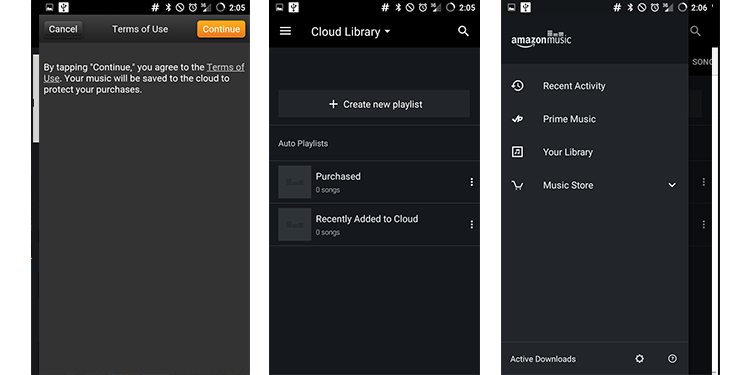 This app also doubles as an offline music player for what you already own or sideload.  Looking on the left side of the app, we see the link at the bottom to the Store. 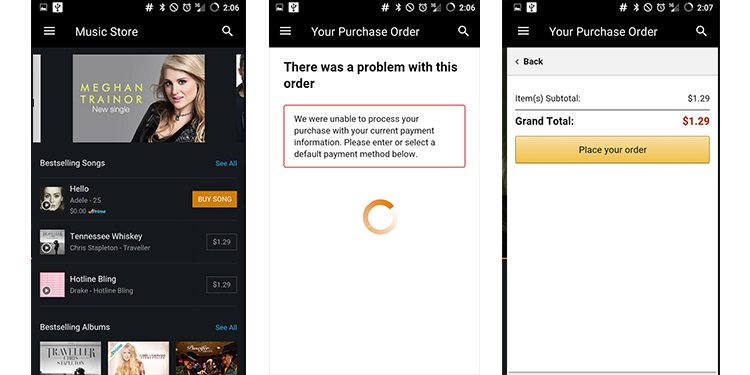 From that point we looked into something by Adele. At first our payment info was a little off and the card was declined. After a bit of fooling with the various settings, we were able to buy the track. 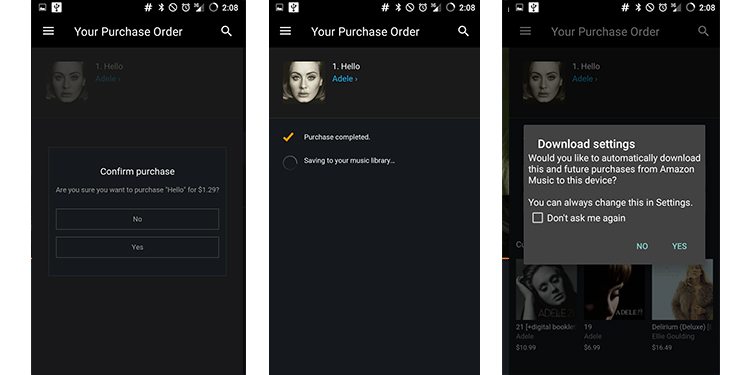 After purchasing the track we had the option of keeping it on our device. 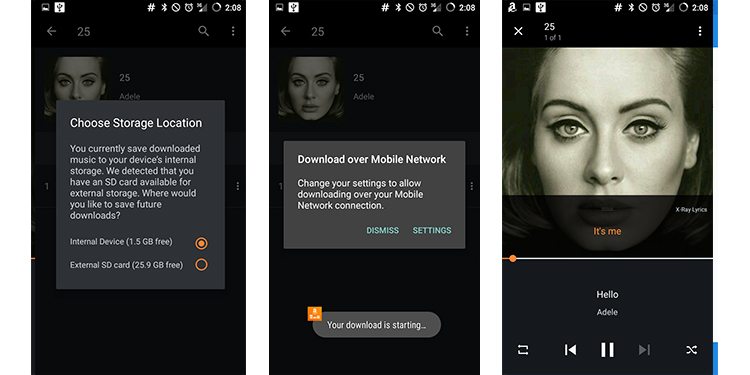 Finding the storage location was a big help as we don’t have much free space on the internal device storage. One great feature of Amazon Music was the inclusion of lyrics for the songs as they play as long as you’re conneceted to the Internet.

After we downloaded the song we went into the file folder to check on the size of the file to determine the bitrate. Although we can’t see the bitrate, we assume it was around 320kbps, double your standard mp3 quality and for all intents and purposes, lossless.

Verdict, if you want to be locked into the Amazon Ecosystem then it’s a great idea provided you never cancel your account. After that you’re at the mercy of how many purchased items you managed to store offline prior to account cancellation.

Get Amazon Music from Google Play

What list of music downloading apps would be complete without Google? Much like Amazon they offer a subscription service that allows you to stream music for free for a flat rate. The differences are, with Google Play Music is they have 30 million tracks compared to 1 million (at Amazon Prime Music launch), they bill $9.99 a month while Amazon is upwards of $100.00 a year. Should you decide to stay with Google, the security of purchasing music cannot be understated as the sheer pervasiveness of Google as a company ensures continued longevity and a way at the very least to redeem music purchased from them if in the near future they become unavailable.

One drawback of Google Play  Music is that is seems unbearably slow in downloading music from their servers. There is no quality level setting for Wi-Fi so if you want to cache music for later you have to have it at their maximum settings regardless of the amount of storage space on your device. To add, there is currently no option to download music by tracks on the mobile app. Using Google Music Manager though it is possible.

If you already have your Google Account synced with your phone then specifying the account if more than one is present is all you need to do. It then places you in the Listen Now area with a personalized radio selection that happens to be free. 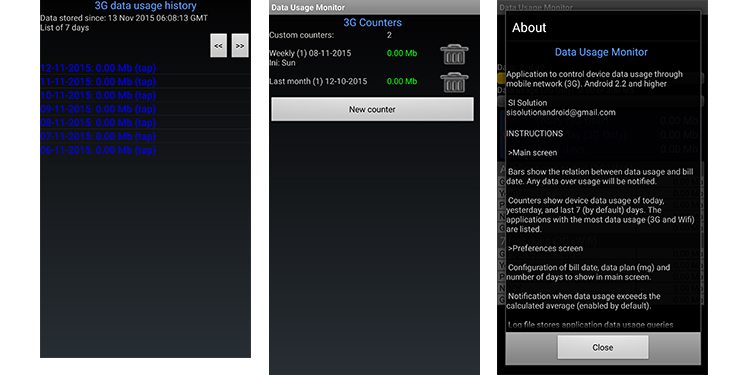 The layout is very simple with universal symbols for the previous, play, next, and repeat. Just to see what the time would be to download a song we went to Imagine Dragons and tried to select one song for download via our phones. It didn’t work, so we opted to try the whole album. 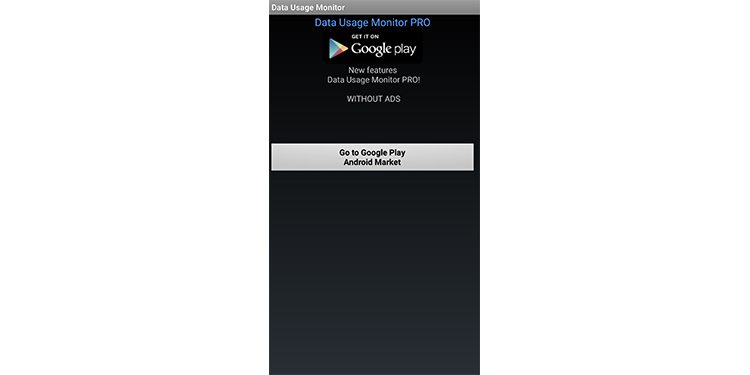 In this example it simply took too long so we stopped. We then went to the Play Store and saw that there were songs for sale individually. Theoretically, you could download one song at a time but it would have to be a purchase for that one song and it would have to be the only one on the album that you possess, otherwise the album option would go into effect.

To show the buying process we bought a “Free” album by Brad Paisley. The checkout process was pretty simple and allowed us to see a few choices beside the album sub-option list.

Whether you choose to download to device or stream, keep in mind it will download it with a random file name and getting it to be recognized by other music players that take mp3’s is near impossible and time consuming. You would be better off just using the Google Play Music App.

There isn’t much else to say about these two big companies other than they set the standard for what other, smaller operations must adhere to in order to fulfill a basic purpose.

Now that we’ve looked at a few well-known–safe–options to get music we are going to now talk about questionable practices that “other” people–I’ll refer to them as “they”–might have employed to have the best of both worlds.

This section really deserves its own article but since it fits in with the scheme of things we are going to place them right underneath. We could have gone with Bittorrent, Vuze, or other popular apps like Rdio, iHeart, or Pandora in conjunction with in app purchases or old school audio captures through your PC but due to a limitation of space not everything gets the a place in the limelight.

After downloading 3 apps, Flud, Utorrent, and Tubemate we went into the first app and decided to search for an album that we already owned. searching was pretty easy as we typed in the artist. 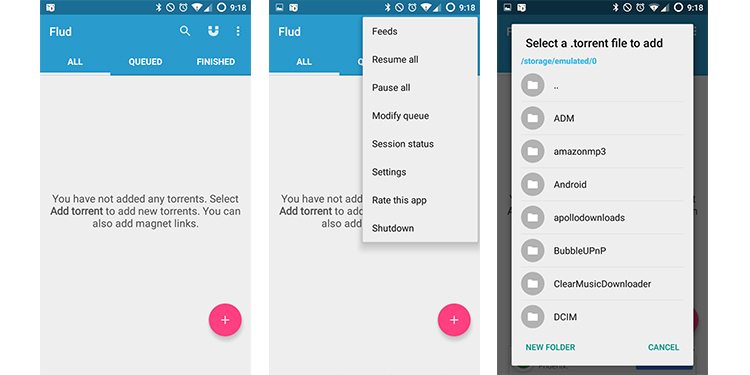 Next, let us note that we did not add the second part of the search string. The application adds that on its own. Scrolling down we decided on a link from Kat.cr. 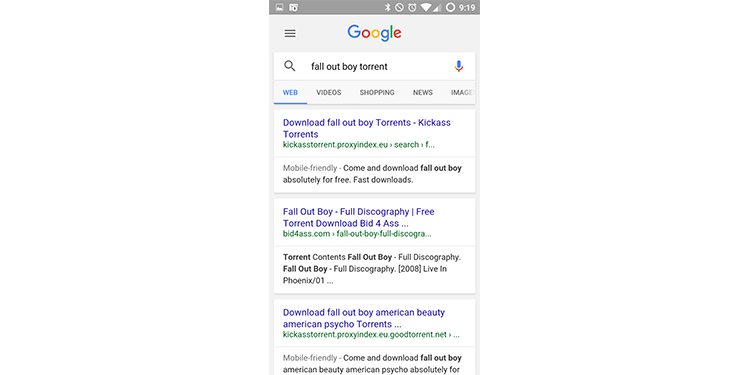 Our only problem with this site is that it will hit you with an ad every time you don’t touch the screen for more than ten seconds and then touch it again. They’re called one-click ads that Adblocker Plus never seems to stop. 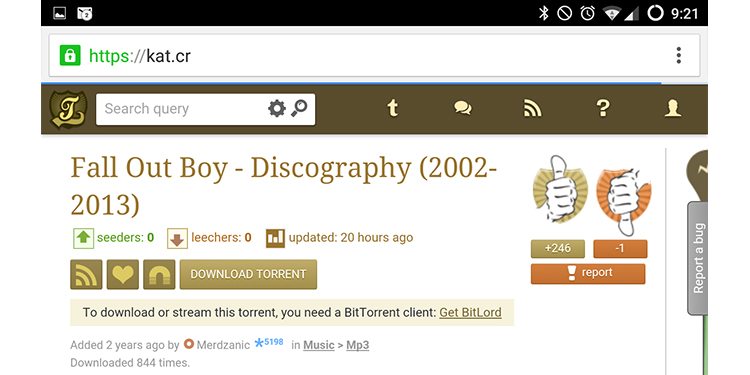 Here we see the website, followed by the content we were looking for. as we mentioned before we already owned this album so… that’s up for individual interpretation as to the right/wrongness of it. We’ve all recorded cassette tapes with rips from the radio at one time or another–but then again I am pretty old so maybe that’s news to you. 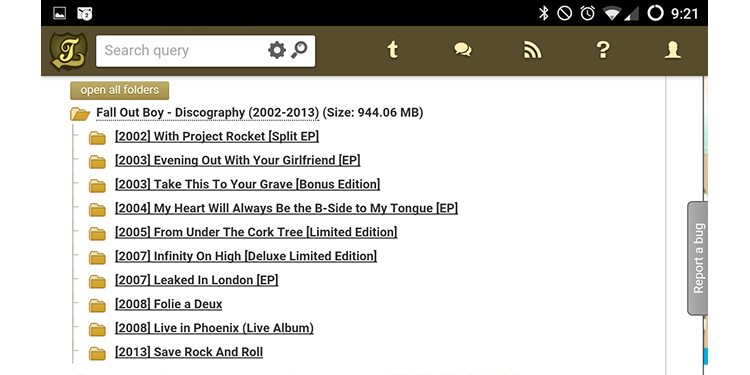 Effectiveness is no contest, depending on the sources we have whatever we decide to download laid out in front of us, sizes are set next to the content as well as the amount of people sharing. Each file has its own markers that identify the format or the quality level. This day and age, not many people use 128 kbps mp3’s anymore, so if bandwidth is a concern, you may have to find another way such as going into a physical store. 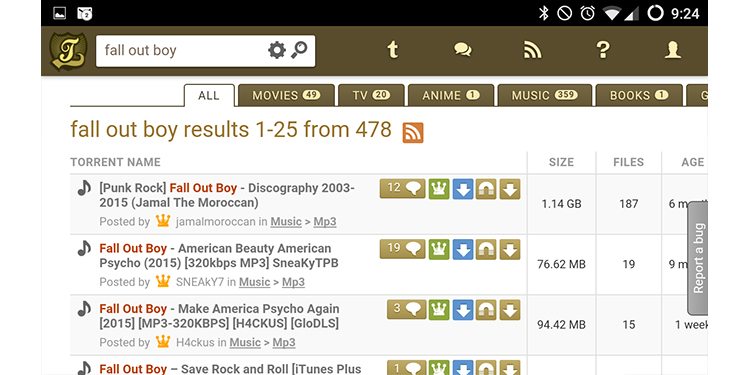 After finding what we wanted we decided to click the magnet link and then we were given the option of what app to use. As we said before, you could technically use any bittorrent client but for our demonstration we used Flud and uTorrent. 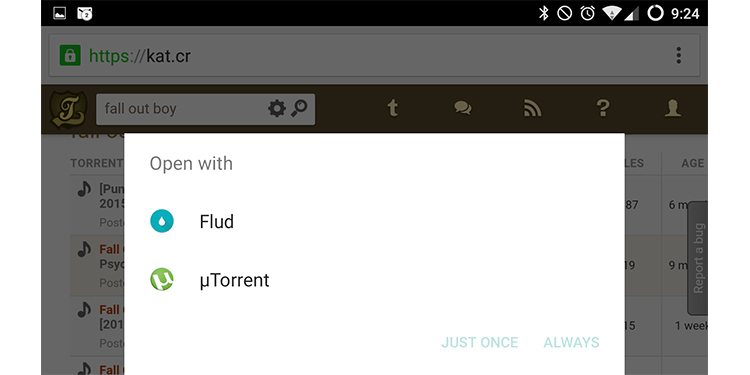 Flud is about as direct as it gets. You are given a few options but nothing more. We can see the amount of time it is going to take to get this album and the percentage done so far. When we go back to the website and choose uTorrent we see the previous torrents that might have been used. 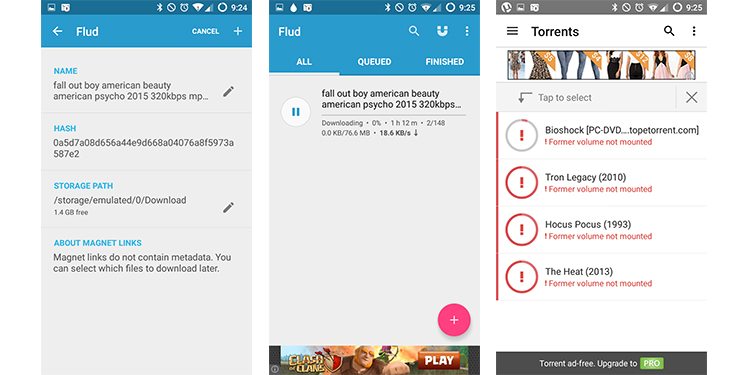 Searching in the text box of uTorrent we were taken to the kat.cr site and chose the same file. 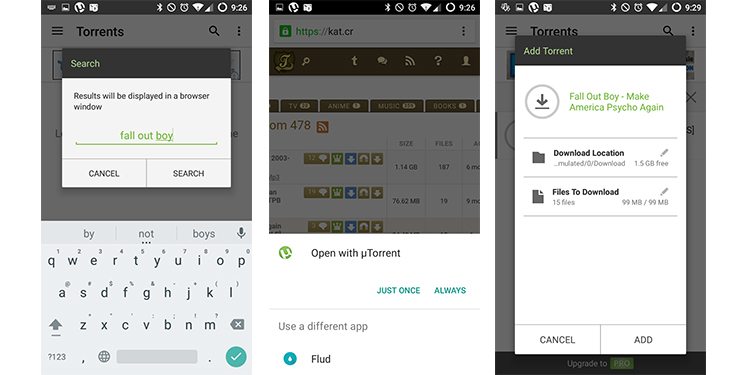 When added to the download queue we were able to see the kB/s down, up, and the seeds/peers. An estimated time as well as file size is shown. You are also able to pick and choose what files you want and the upload speed for your own sharing. 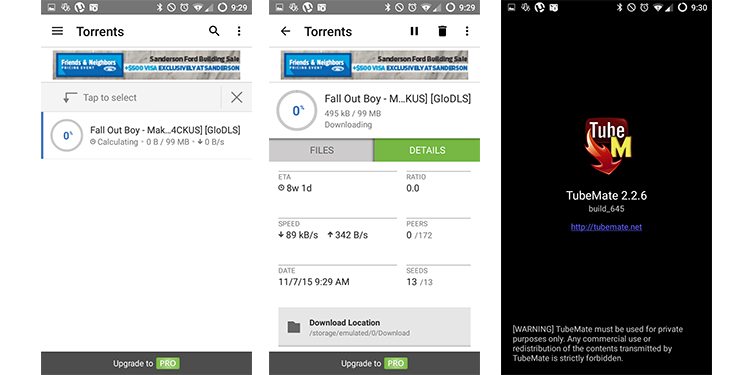 Another oddly efficient way to get singles is through downloading the audio streams off of a typical YouTube video. You just need a client that will separate the two after you download the video. For this task we used Tubemate. We searched for a song and as seen below, many results popped up. 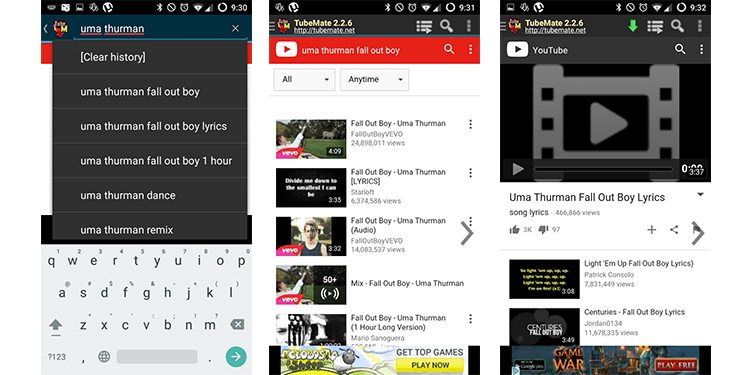 You would have to be discerning with the sources you choose to use as the quality and duration is all up to the uploader of that particular video. In my personal experience, Vevo videos won’t let you but many others have uploaded videos that just show album art and play music. 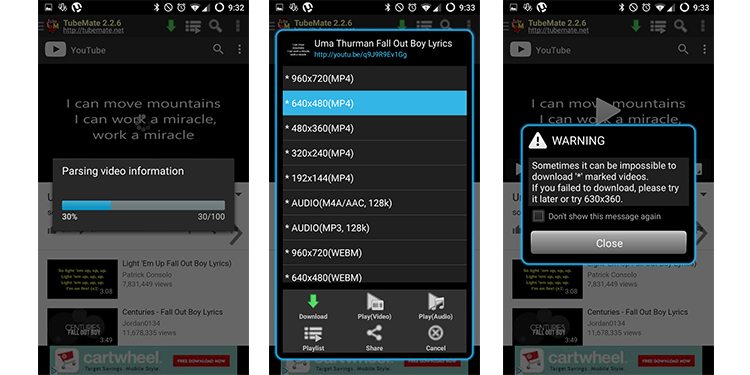 Clicking the tiny green arrow we were given a set of options for video resoution/formats and the choice of just ripping the audio track. 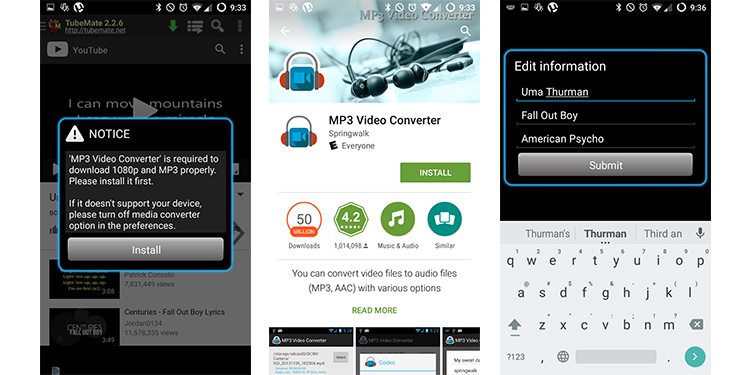 What you will need however is a small app called Mp3 Video Converter off of the Google Play Store. Once that is done, go back to Tubemate, and try again. You then should be taken to a plac where you enter in metadata such as song title, artist, and album title. 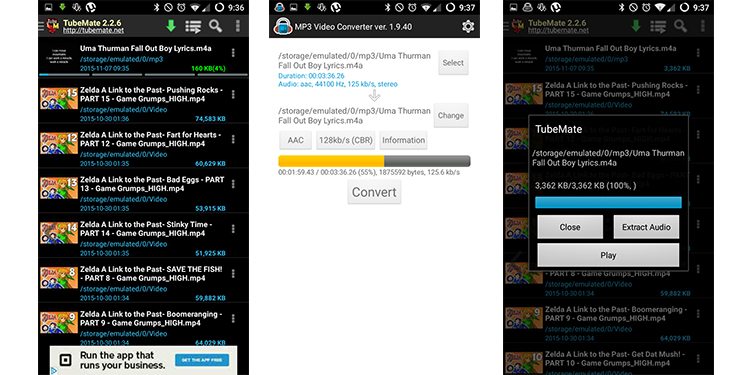 When that is finished, you can check on the status of your download. 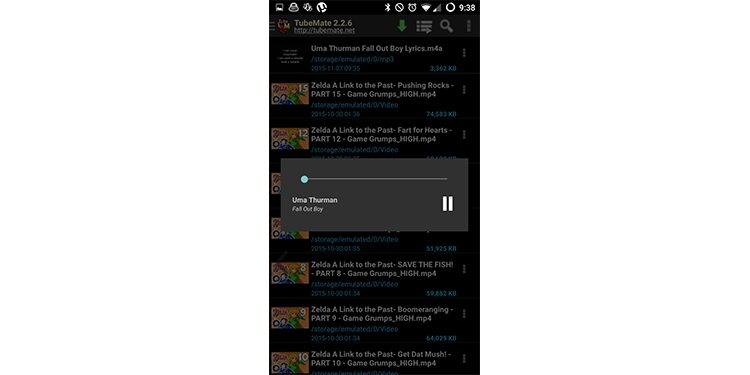 clicking on the file that’s finished lets you play it in the player of your choice. You should be able to see it after a short time. If you can’t see it in your player library then you need to reboot your phone so the media scanner can reintiate–sometimes it only starts on boot.

In order to use Tubemate you will have to enable installation from outside sources under the secufity tab in your settings.

Get uTorrent from Google Play

Get Flud from Google Play

These are just a few ways to get what it is you’re looking for. Some ISP’s block torrenting data traffic, some may even send you a warning. We tend to think as long as things are done in moderation then it shouldn’t raise any red flags. Again, we do not advocate going out and doing things for free. Everyone needs some sort of compensation. So go out and buy the albums and support the artist where possible.

Best Baby Apps to help with your Newborn

3 Apps for Toddlers you need NOW