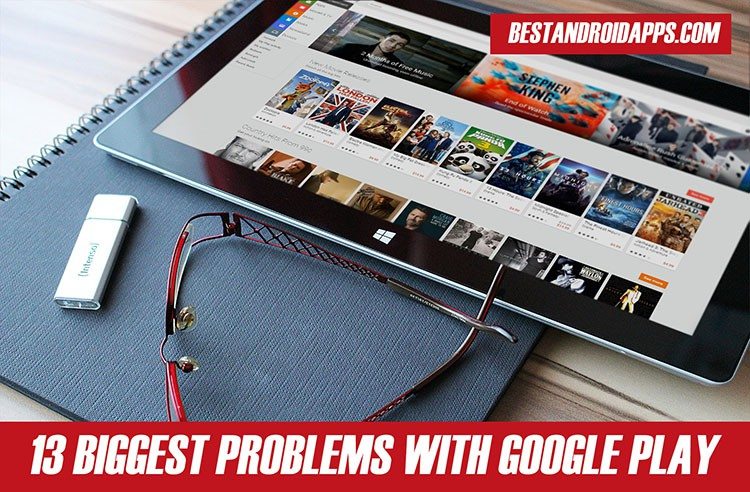 I have been a Google User for over seven years. In this time I’ve seen the rise and fall of Microsoft’s windows phone, Apple’s humble beginnings, and the milestone that we will forever remember as the OG Droid. I remember when Google Play was the Android Marketplace. I recall we witnessed a massive change in the UI when Froyo jumped to Gingerbread. I can tell you when we first started seeing YouTube being integrated with content on Google Play. I can even tell you the exact day I jumped ship from using an LG ENV3 to the Droid X2.

Need I mention the passing of Steve Jobs or the health scare from Larry Page?

Many of us remember the  phrase “Thermonuclear War” quite well.

Along the way I’ve come to understand that things change. Based on past performances all things must adapt. When technologies fail to adapt they literally fail to exist. Quite a few made their home on Wikipedia’s “History Of” articles.

Being a witness to so many things I tended to overlook some of the glaring problems associated with improvement. After all, no one can anticipate the problems that a change in code can cause with hundreds of different types of handsets using different versions of the Android OS. I figured, well… they’ll fix it… eventually.

Some problems manage to persist long after the call to action.

Among those problems are those associated with the Google Play Store.

Now I appreciate the faux open-source of the platform. Google sends out it’s code for Android to different developers to do what they wish. On the surface this seems very transparent–charitable even. The maxim “Do no Evil” comes to mind. However if the platform was truly open-source perhaps we might not have the same problems experienced over and over.

At the very least some form of human contact when working with Google developers to address the problem would be appreciated. Has anyone tried to contact Google Customer service?

Does it even exist?

The worst offenders in Google Play

For this we’re going to use a number system, if you’ve read this far then by all means enjoy the commentary. But I find it’s easier for people to find what they’re looking for if I use numbers to highlight the points.

This right here takes the cake as the worst sin that can be found on Google Play. It is the umbrella from which low quality apps and copycat apps camp under. 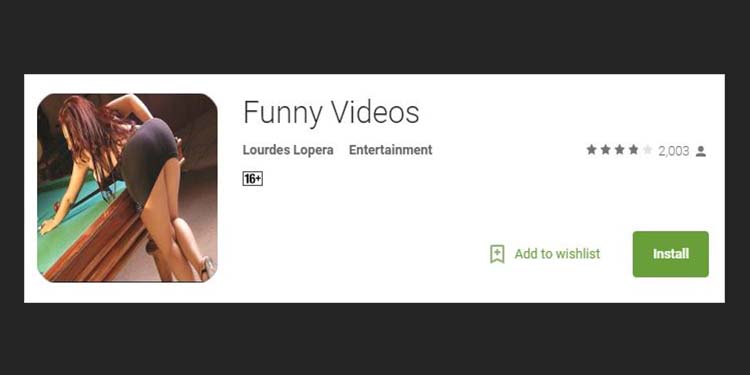 Just look at this thumbnail.

By downloading this are we going to see a bunch of half-dressed women in provocative poses? If I was searching for this sort of nonsense I would definitely be disappointed right? It seems to be aimed at teenage boys who think there’s something to be had within. 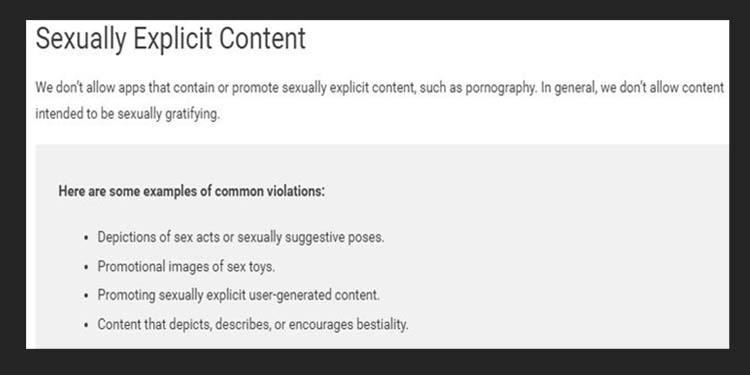 This is just one example. There are literally HUNDREDS of these things greedily sucking away your precious time with big names and big promises such as the infamous: WiFi Tether Free. Applications like these deserve to be erased or at least include “NOT A FREE CARRIER TETHER ENABLER.” Because if you ask me, having to sift through the description for this particular disclaimer is tedious. A bunch of people giving it great ratings just because they’re too bothered to go into settings and enable tethering they have included in their carrier plan is the worst kind of encouragement.

2. Ratings do not matter

Ratings are hit or miss. Not only do App Developers ask explicitly for 5 STARS in their applications they don’t ask for comments. The fact that Google Play allows people to rate without giving worthwhile feedback is atrocious. Another point is people don’t rate apps the way they should. Everyone’s idea of what 5 stars means is different. Most people rate apps either 1 or 5 and naught to be said about what their rationale might be.  Rating an app 5 stars is virtually useless, Tech Crunch can confirm that for me.

Applications are allowed to be published as long as they adhere to developer guidelines in Google Play. This means there are going to be a lot of crappy apps. Part of the reason WE exist is to sift through all of that. IN FACT IT MAKES OUR JOB HARDER. Fixing this won’t put us out of the job, rather it would help so we could focus more time of accurate and worthwhile curation for you all. 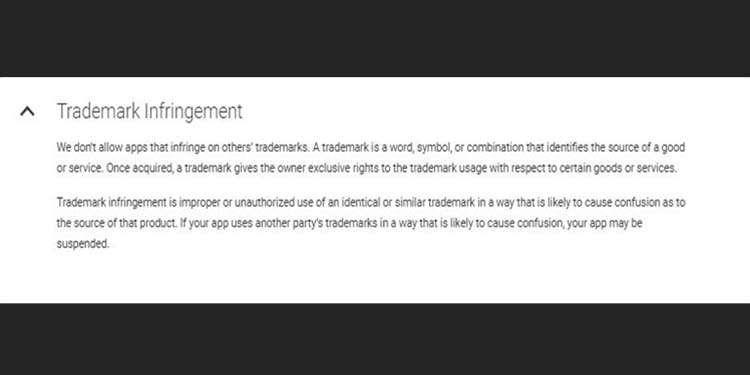 Doing a search for a few games I stumbled upon a few that were absolutely, ungodly, and inexcusably terrible. Caution, these reviews have a ton of bad language but they capture the sheer frustration of horrible development quite well. 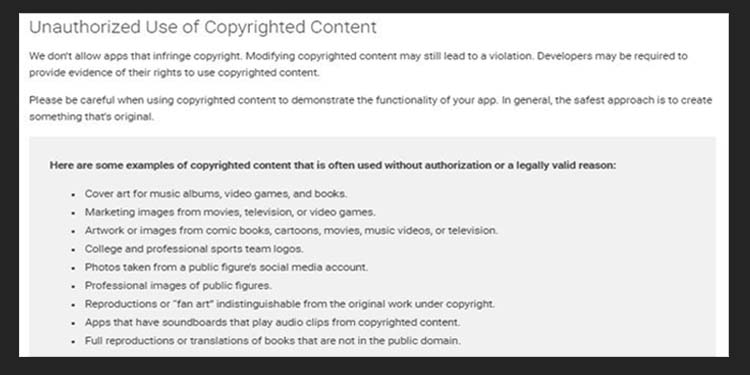 When was the last time you did a search for an application on Google Play? When you searched what did you come up with? Here’s what I came up with by searching for an app developed by Rockstar Games. 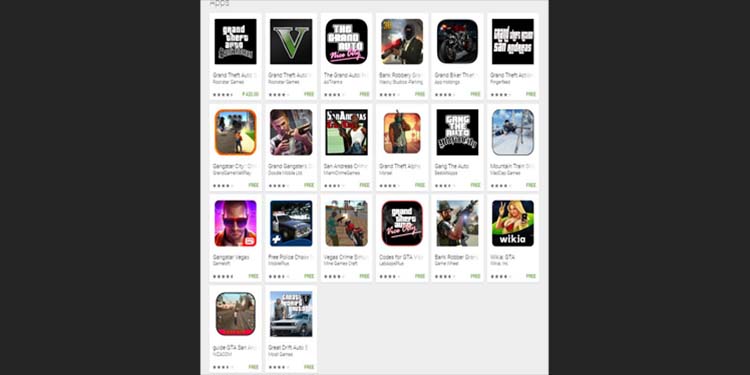 Does changing the Title to to “Gang The Auto?” make this copyright theft of concept any less heinous? What about, “Grand Theft Alpha: Crime City?” 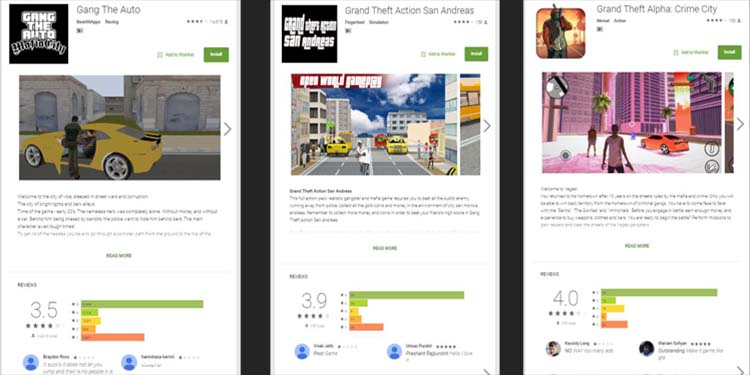 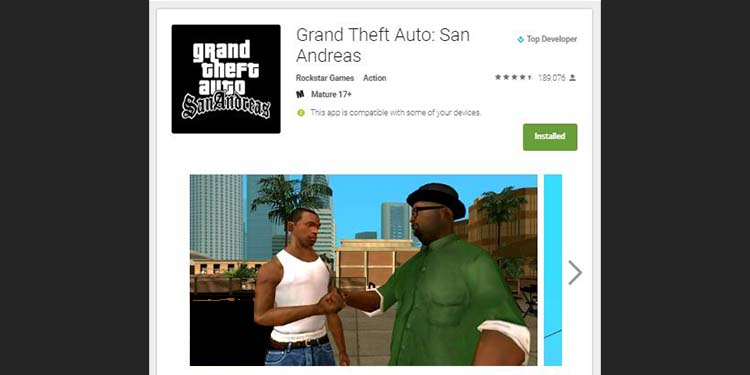 There’s so much more I could say about it but I’ll just show you. 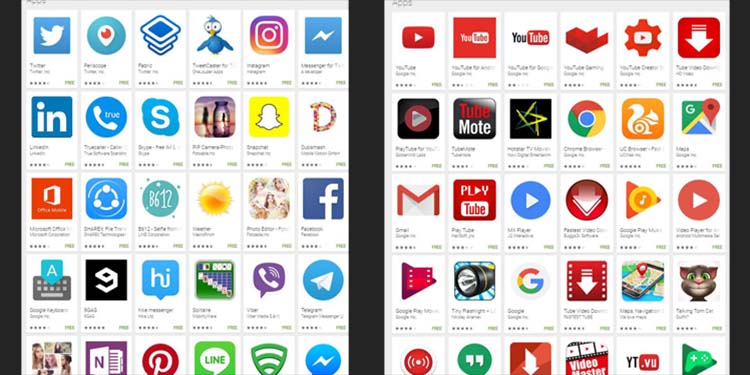 So you’re on your phone right now? If you aren’t, pull out your phone and go to the Google Play App, I’ll wait while you do it. 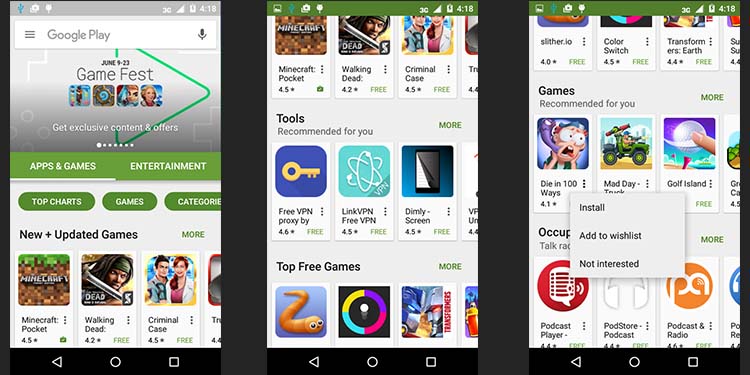 Why do we have so many gaps in between categories. I would assume this would help those with smaller phones and larger fingers, but what about the rest of us? It may seem like a small thing but why not wrap the graphics closer together and shave off those three dots? They serve no real purpose, I HAVE NEVER clicked on those three dots. I also think that oversized search bar and the slideout menu are way too big.  And the featured content portion at the top? That takes up almost half the first screen. Scrolling might be a fix for now but we need to reduce the thumbnails a bit and keep the font size how it is.

There’s gotta be a way to cram more things onto the screen. Tablets are an even bigger mess. A bigger mess of empty space.

Have you ever been suggested an app you already own? Take a look at the picture above under the previous point.

I already have Minecraft.

It does more than that though. If you love to download popular apps… be prepared to be reccomended redundancy. 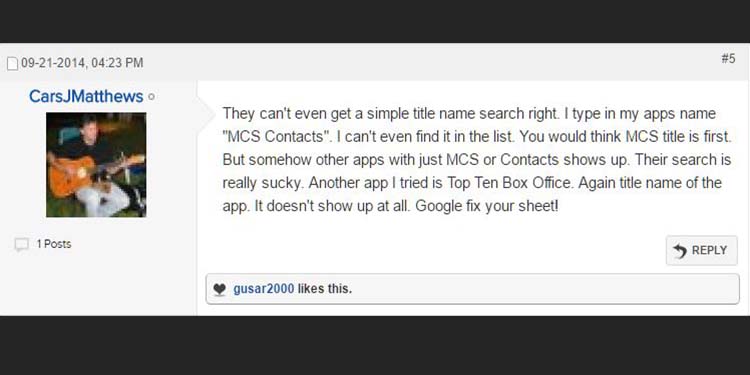 Part of the problem with Copycat apps are there’s no way to filter them out. It’s fine if a developer uses core apps for “inspiration” but we should have something on our end to filter out that “inspiration”  when we want an app that isn’t a knock-off.

When searching Need for Speed and Minecraft: 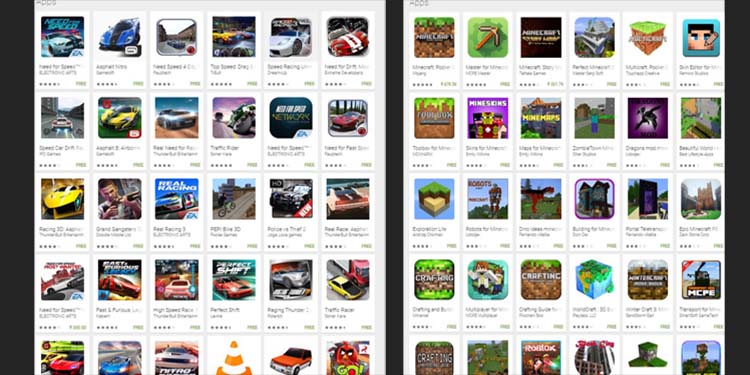 So how many apps derived “inspiration” from these two? Shouldn’t there only be version of the main game? 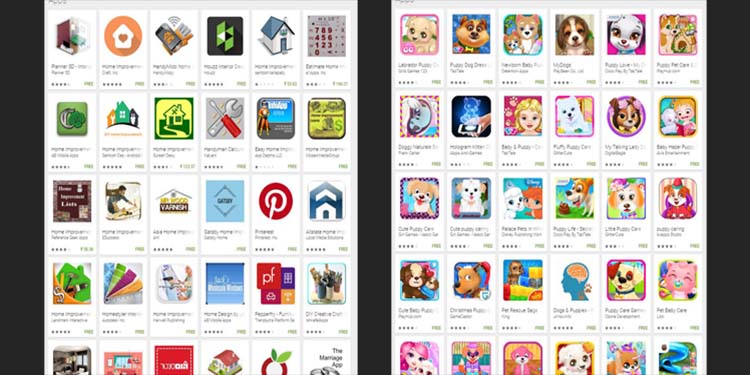 WHAT DOES PINTEREST HAVE TO DO WITH ANYTHING? WHY ALL THE GAMES??

Ok I admit we can do this, but only if you’ve previously downloaded it before. What if you see several apps on the page. Can we just long-press it and choose to install all? No we can’t.

We looked for Netflix and came up on this: 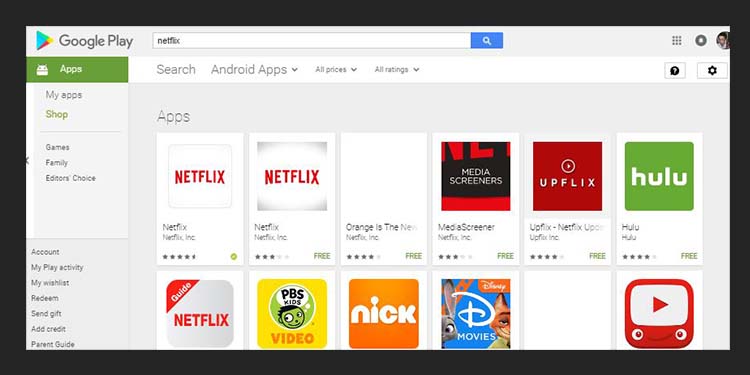 Which one of these is for a phone? Which one is for a tablet? Do we find out only when we have to click that image? Why can’t there be a tag that states, “Tab” or even an icon?

Small concern but I’m sure those with tablets and phones feel my pain. 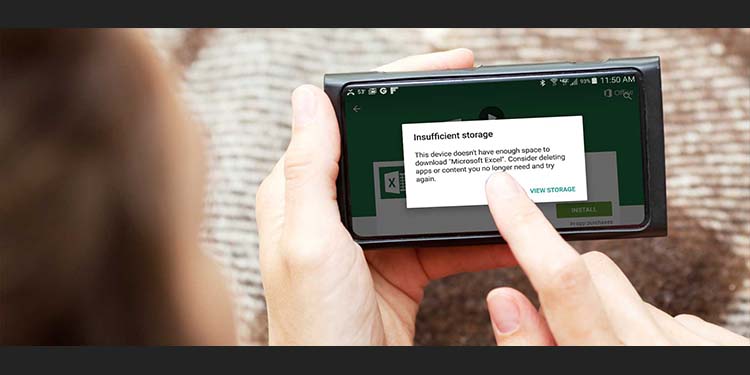 Why does this happen? I HAVE 5 GB on my phone!

We’ll I’m not sure but I’m sure they’re sure there’s not a problem… for sure.

Obtrusive ads, the ones that bother you when your sleeping as a notification. Or the ones that pop up when you try to exit an app. These are the reasons why we all buy Paid Ad-Free Versions. At some point you’re going to get tired of the ads and either uninstall or just go ahead and buy it. But why don’t they warn us? It’s buried in really small. Most times we have to rely on reviews that say “there’s too many ads” or “the ads are too big.” Why should we have to investigate this? Google it’s YOUR STORE. 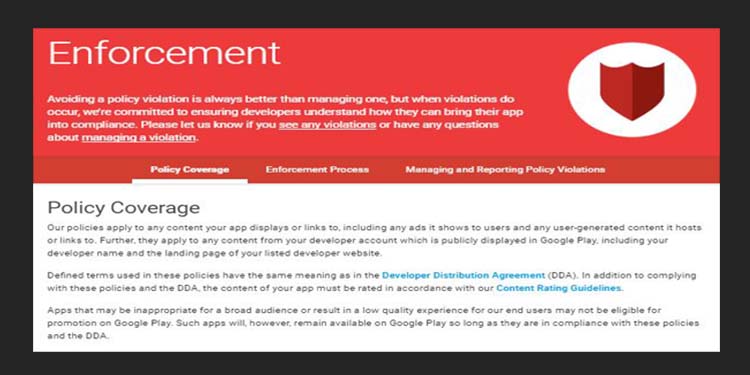 Just like we can’t install a ton of apps at once, we can’t uninstall them at once. Unless you go to a third party but… geez really? By now they should have figured this one out. 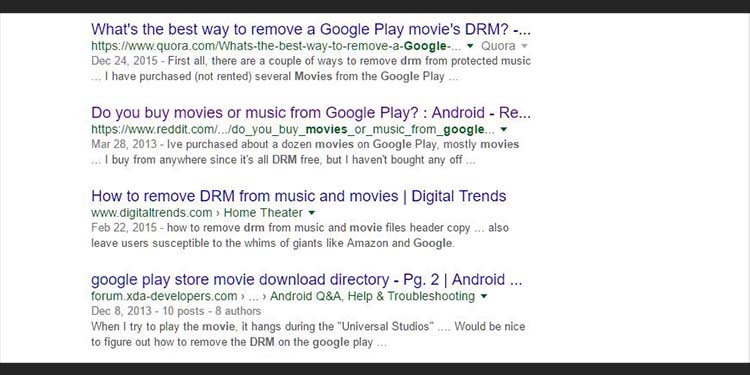 We could go on about Digital Rights Management all day but the point is, why can’t you own something you buy? There shouldn’t be so many of these posts if that wasn’t an issue right? I want to buy a movie, then I want to download it and move it to where ever I want to watch it. I don’t want a Desktop Google Movie Client because maybe I prefer VLC player. I don’t want a Google Books Desktop Client because maybe I WANT Calibre. Does anyone care? Not really. 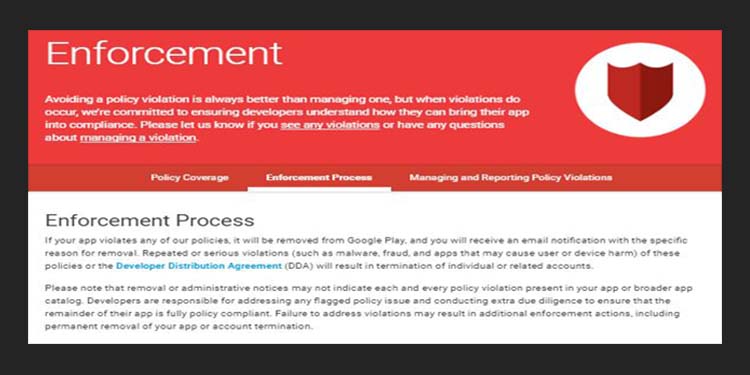 Google is a wonderful service. Most of us take it for granted. With free comes concessions. We can’t have everything. Though, if Google would address even half of these concerns that would make my day. If you continued to read this far then I’m sure that would make your day too.

The opinions expressed by the Author of this article do not reflect the opinions of BestAndroidApps.com or any employee thereof. 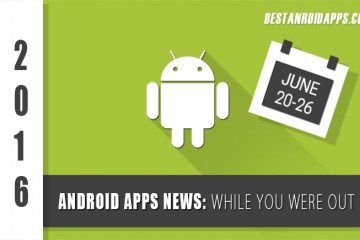